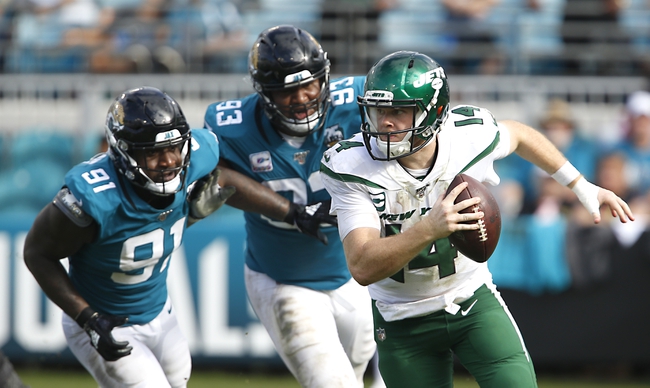 The Jacksonville Jaguars and the New York Jets meet in a Madden 20 NFL simulation game on Friday afternoon.

The Jacksonville Jaguars come into this game looking to build on a 30-27 overtime win over Tennessee in their last outing. Leonard Fournette leads the jags on offense with an 83 overall rating with 92 speed and 96 carrying. D.J. Chark Jr. sits at 81 overall in the at wide receiver with 91 catching as well. On defense for Jacksonville, each level of Jacksonville’s defense has an 84 overall rated player at the level with A.J. Bouye leading the secondary, Telvin Smith in the linebacking level and Yannick Ngakoue up front in the trenches. Bouye owns an 89 speed rating with 94 acceleration and 91 agility while Smith has 87 speed with 89 acceleration and 88 agility.

The New York Jets will look to build on a 20-12 win over the New York Giants in their last outing. Le’Veon Bell leads New York on offense at 88 overall, including 89 speed, 92 acceleration and 95 agility as well as 88 carrying and 91 juke. Robby Anderson leads the Jets’ receiving group at 84 overall with 91 catching while Sam Darnold is at74 overall as the Jets’ starting quarterback. On defense, Jamal Adams leads the Jets with a 92 overall rating, with 95 power and 92 zone coverage as well as 91 speed and 90 acceleration. The Jets also possess a pair of 85 overall rated middle linebackers in C.J. Mosley and Avery Williamson, with both boasting 89 acceleration and Mosley having 91 tackling while Williamson has 86 block shedding.

This is a matchup I’m really not trying to pick a side in, as neither side has been much of anything to write home about so far. Instead, even with the low total, I’m still going to side with the under. These are two lower-scoring teams as it is, and I’d be surprised if this one went above 41 points, something in the area of 24-17. These sim games can be high scoring but I don’t think this one is. Give me the under.