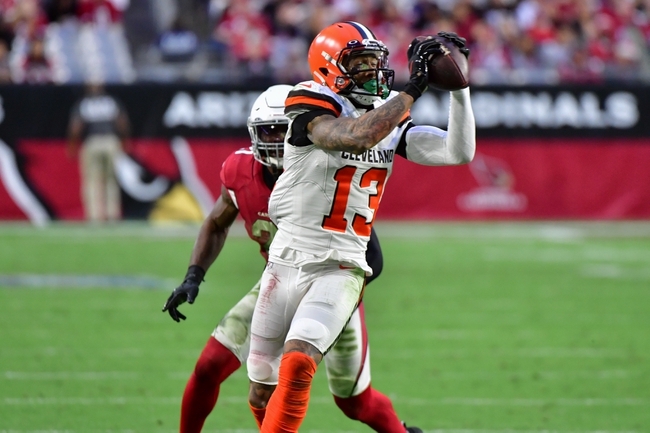 The Baltimore Ravens and the Cleveland Browns meet in an AFC North division matchup in a Madden 20 NFL simulation game on Saturday night.

The Baltimore Ravens will be out to bounce back from consecutive losses after a 41-10 loss to San Francisco last time out. Lamar Jackson leads the Ravens’ offense at QB with a 92 overall rating, with 92 throw power and 92 short pass accuracy to go along with 96 speed, 96 acceleration and 95 agility. Mark Ingram II comes in at 86 overall in the Ravens’ backfield with 88 speed, 91 acceleration and 89 carrying while Mark Andrews is close behind at tight end with an 85 overall rating. On defense, Earl Thomas III leads the Ravens with a team-high 93 overall rating, including 92 jumping and 96 zone coverage at free safety. Michael Pierce is a solid 91 overall on the d-line with 94 block shedding and 90 impact blocking while Marlon Humphrey and Marcus Peters impose a strong cornerback duo at 89 and 85 overall for Baltimore. Humphrey owns 90 man coverage, 92 speed and 93 acceleration while Peters has 87 man coverage, 91 speed and 91 acceleration.

The Cleveland Browns will try to build on their 3-1 sim record after a 19-16 win over Cincinnati last time out. Nick Chubb leads the Browns’ offense with a 92 overall rating, with 92 speed, 91 acceleration and 85 strength grades. Odell Beckham Jr. is the top receiver for the Browns, rated 90 overall with a 99 rated spectacular catch as well as 91 in catching in traffic and a 98 mark in ball carrier vision. Beckham Jr. also has 94 attribute ratings in speed and acceleration and 98 agility. Kareem Hunt comes in at 88 overall at running back, with 90 speed and 92 acceleration and 92 agility along with a 98 carrying rating. Baker Mayfield comes in at 76 overall at starting QB including 93 throwing power, 87 short pass accuracy and 85 long ball accuracy. On defense, Myles Garrett is the top dog with a team-high 93 overall rating at defensive end, with 85 speed, 90 acceleration and 96 strength as well as a 95 power move rating.

This game is a hard one to call, as we know the Ravens are talented and have a loaded defense, but the Ravens also haven’t been all that convincing in these sims and sit just 2-3 in the sim games so far. On the other hand, Cleveland has played well, but the Browns were throttled by the Steelers and barely scraped by the Bengals last time out. All in all, I think the game is giving us what we thought we’d see from Cleveland this season, and while a Ravens beatdown wouldn’t surprise me, I think the Browns can keep this one close if not pull off the upset, so I’ll take a shot with the Browns and the points here.