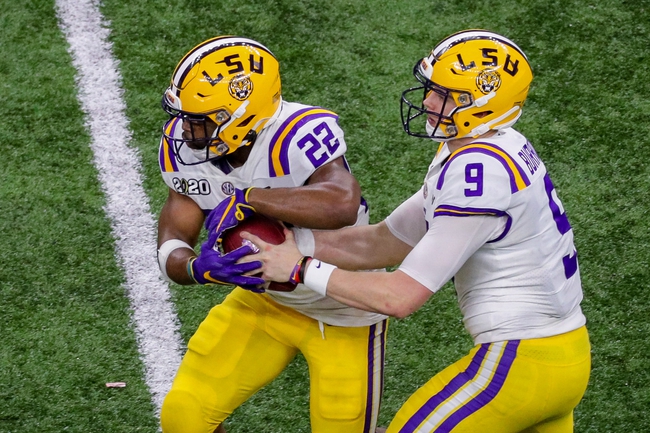 Clyde Edwards-Helaire comes into the 2020 draft as one of the higher running back prospects in the field as a dangerous and key part of the national champion LSU Tigers and their stellar run to the national title this season.

College Career: Edwards-Helaire saw little action in his freshman season in 2017 before getting a heavier workload and splitting time with Nick Brosette in 2018, logging 658 rushing yards and 7 TDs. CEH had the LSU backfield to himself in 2019, and broke out accordingly, logging a personal best 1,414 rushing yards and 16 touchdowns while also recording 55 catches for 453 yards out of the Tigers’ Backfield.

Strengths: Edwards’Helaire may not be the tallest back, standing a mere 5’7”, but CEH is shifty and extremely elusive and when he found a gap, Edwards-Helaire made the most of it, especially when it came to picking up yardage after contact. Edwards-Helaire also showcased one of the most important traits for any running back, collegiate or professional, and that’s taking care of the football. Edwards-Helaire had 270 touches last season, rushing and receiving, and only fumbled the ball twice, and losing only one of those fumbles. Ball security is a major plus for CEH, and any team would be lucky to have a protector like him in their backfield.

Weaknesses: Edwards-Helaire is shifty, but as far as speed goes, there are faster running backs in the draft, as CEH put up just a 4.60 40-yard dash at the combine. Edwards-Helaire is viewed as more of an inside rushing running back, not the kind that will rush to the edge and get the angle down the sidelines, which may be a problem for some teams depending on their running game/scheme. Edwards-Helaire’s height also becomes an issue in pass protection, as he’s a smaller back so he will most likely have issues with pressure recognition and protection as well as dealing with the rush that the bigger defenders bring to the table.

Outlook/possible fit: Edwards-Helaire’s versatility in all aspects of offense will be valued at the NFL level as a running back that isn’t afraid to pound the rock up the middle and make defenders miss catching balls out of the backfield. If Edwards-Helaire can develop technique and strength to combat oncoming defenders, CEH could be a viable three-down starting running back in the NFL sooner rather than later. One team I could see Edwards-Helaire landing with is the Kansas City Chiefs. A lot of boards have CEH in the late second round, and he would be a perfect fit in the KC backfield. Patrick Mahomes has a bunch of downfield threats at wide receiver, leaving space for CEH to wreak havoc with swing passes if cornerbacks get drawn into coverage chasing the receivers. The Chiefs also have Damien Williams, but Edwards-Helaire could also be that smash mouth running back up the middle while Williams could excel in rushing to the outside. Either way, I see CEH being a solid fit for the defending Super Bowl champions.