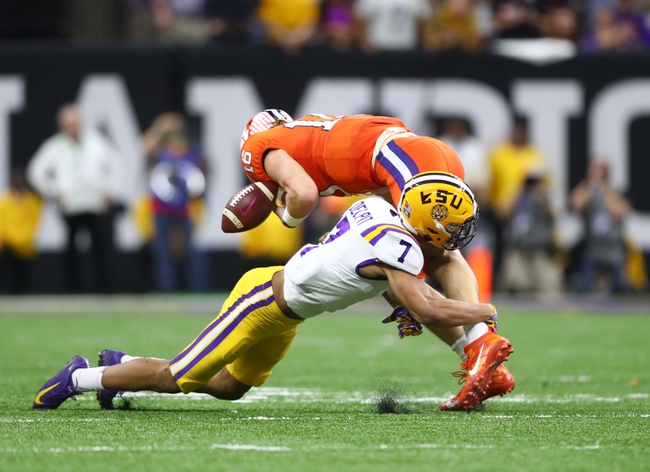 Grant Delpit is a safety out of LSU who is projected to be an early-round selection in the 2020 NFL Draft. With four bowl games, a CFP National Championship and a Jim Thorpe Award under his belt, Delpit will get plenty of attention from many different teams on draft day.

College Career: Delpit was born in New Orleans, but his family was displaced by Hurricane Katrina. He played high school ball in Houston and Florida before relocating to LSU for his college football career.

Delpit played in all 13 games with 10 starts in his true freshman 2017 year, posting 60 tackles with one pick. He ended up having a decorated college tenure, earning the Jim Thorpe Award, two First Team All-SEC selections and two Consensus All-American nods. Delpit chose to forego his senior season of eligibility to declare for the 2020 NFL Draft.

Strengths: Delpit is an aggressive, tough player. His physicality is on full display at all times, and his gritty toughness allowed him to play through a high-ankle sprain last season. He’s quick and merciless in pursuit, and will sacrifice his body to make a play on the football.

Delpit can get into the backfield to set edges when he’s called upon to do so, and can press up against even the most aggressive tight ends. He has good instincts which lead him to make quality jumps on receivers. Delpit won’t hesitate to put a big hit on a pass-catchers moving over the middle, either.

Weaknesses: Delpit’s hip work in coverage lacks fluidity, and his high safety range could be better. In run support, he sometimes chooses the wrong angles and allows extra yardage, and his relatively slim frame could cause some durability issues down the line.

Delpit whiffs on tackles way too often and really could use some clean-up work on his technique there. Still, with some coaching up and some hard work on the practice field Delpit has every capability of becoming a very good NFL-level starter.

Possible Fits: Although he was considered a first-round lock prior to his (injured) 2019 campaign, Delpit is likely a second-round pick in the 2020 NFL Draft. He’ll probably be part of that rush of high-upside CBs, LBs and safeties coming off the board in that area, and pretty much every team will give him a good look when they’re on the clock during that time.

Carolina holds the No. 38 overall pick, and that’s an intriguing landing spot for Delpit. The Panthers need some help patrolling the middle of the field on defense, and his play style would fit in perfectly. A Delpit selection there would be an immediate upgrade.

A little further down are the Bears at No. 43 overall. With Ha-Ha Clinton Dix gone in free agency, Chicago could use Delpit’s presence to help bolster their secondary. Picking him up with this selection would be a great value, and I don’t think Delpit would last much longer than this spot in just about any scenario. He's just too good to pass up.