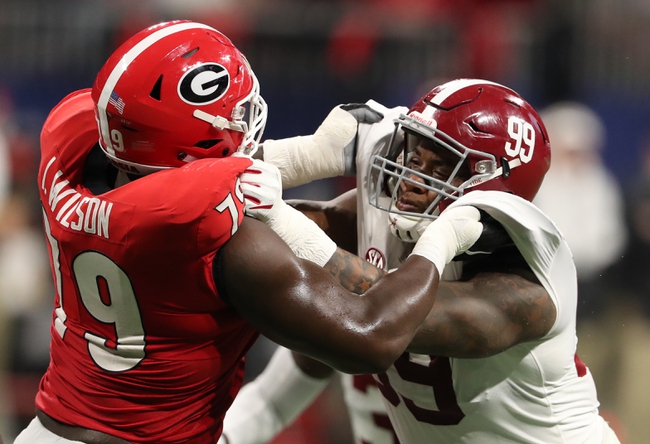 Isaiah Wilson is an offensive tackle out of Georgia who is expected to be an early-round selection in the 2020 NFL Draft. Wilson has plenty of early durability at his position; he started 24 of 25 games over the 2018 and 2019 seasons.

College Career: Wilson went to Poly Prep in Brooklyn, playing in the Under Armour All-America Game in 2017. He was a five-star recruit coming out of high school, and though he was linked to Alabama for a time he ultimately decided on heading into Georgia, where he redshirted his first year. Wilson earned Freshman All-American and SEC All-Freshman honors there.

Wilson became Georgia’s starter in 2018, and after 24 starts in that frame he decided to forego his final two seasons of eligibility and enter the 2020 NFL Draft.

Strengths: Wilson is well-admired for his above-average physical gifts and intriguing potential. He’s muscular with a strong core, and his body composition is top-notch. Wilson doesn’t let defenders around him easily, and he’s got a great natural movement that stuffs opposing players at the point of attack.

Wilson is great at sealing the gap, and his strength is very useful for widening running lanes. His pass protection still needs a little grooming, but all of the tools for improvement are there and under the guidance of a good coaching staff Wilson should develop nicely.

Weaknesses: Though he’s got 24 starts under his belt, Wilson only played in college for two years, so he lacks the seasoning that some other players do. As a run blocker, he leans forward too much and can lose balance. His pacing and control during blocks could also use some work.

Wilson can have issues with edge rushers due to his tight hips, and he sets with his weight too far back. His footwork also could use some refinement. Long story short, Wilson does have some issues he needs to clean up but the potential ceiling here is high.

Possible Fits: We’ll likely begin hearing Wilson’s name toward the end of Round 1 in the 2020 NFL Draft. There will be a couple of O-line guys going off the board before him, but he’ll always be in consideration due to his massive upside.

Cincinnati is sitting at No. 33 overall, and that’s probably the first place Wilson may find a home. The Bengals lost Cordy Glenn to free agency and Jonah Williams has had some injury issues so a Wilson pick here would make complete sense.

Another interesting spot is down a little further at No. 64 overall. That’s where Seattle currently resides, and that would be a situation Wilson could shine in. The Seahawks could use an improvement in their right tackle slot, and Wilson’s run blocking abilities would benefit Seattle greatly. If he’s still on the board (which is no guarantee), I don’t see the Seahawks passing on Wilson there.