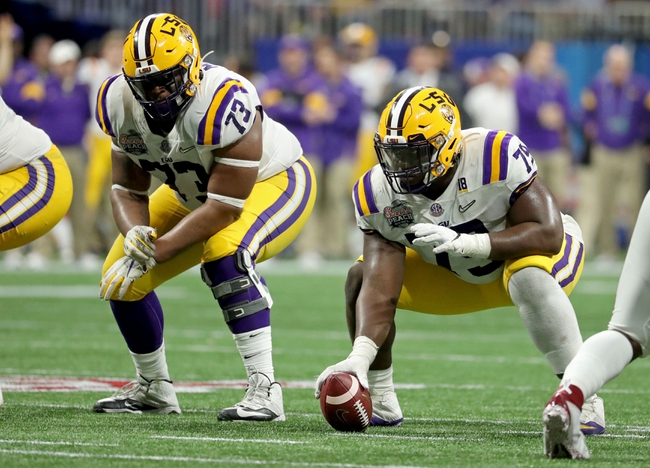 Lloyd Cushenberry is a center out of LSU who is expected to be an early-round selection in the 2020 NFL Draft. Cushenberry was First Team All-SEC and part of the CFP National Champion squad in 2019, and plenty of NFL teams will be interested in his services on draft day.

College Career: Cushenberry grew up in Carville, Louisiana. Although he initially committed to South Carolina, he eventually chose to stay in-state and go with LSU. In his redshirt freshman season, Cushenberry played in 11 games total, six of those on offense. He entered his sophomore campaign as the Tigers’ starting center, then made First Team All-SEC in his junior season.

Cushenberry elected to forego his senior year of eligibility to declare for the 2020 NFL Draft.

Strengths: Most scouts have Cushenberry developing into a starting NFL center within the first couple of years, so he’s bound to gain plenty of attention. Physically he passes the eye test, with great length, power, core strength and big hands. Cushenberry jumps off the line at the snap and is in position quickly, utilizing great hip technique to help carve out a gap.

Cushenberry’s posture on pass protection is excellent; he keeps his head back and hands placed properly throughout a play. He could be dangerous on an O-line with good chemistry, as he handles block pass-offs well.

Weaknesses: When it comes to run blocking, Cushenberry doesn’t have the range that some other linemen do; he may need to be schemed in smaller spaces so that he can play to his capacity. Cushenberry sometimes loses positioning against lengthy rushers, and needs too much help from his guards to create movement.

Cross-face rush counters seem to flummox Cushenberry, and he allows too much pressure on his edge. With some good coaching and technique work however, he could probably clean most of this stuff up.

One nice spot for Cushenberry to potentially land is with Miami at No. 56 overall. Once the Dolphins take their presumed QB of the future with their first pick, it wouldn’t be surprising to see them load up on offensive line guys who can protect him. Cushenberry would fit that role well.

Assuming Cushenberry drops a little further down, the Redskins have the No. 66 overall pick. Washington lost their left guard in free agency and has some imminent expiring contracts, so it would make sense to see him become a Redskin. I don’t think Cushenberry would fall much further than that, however; with his upside, I don’t even see him lasting past the second round.