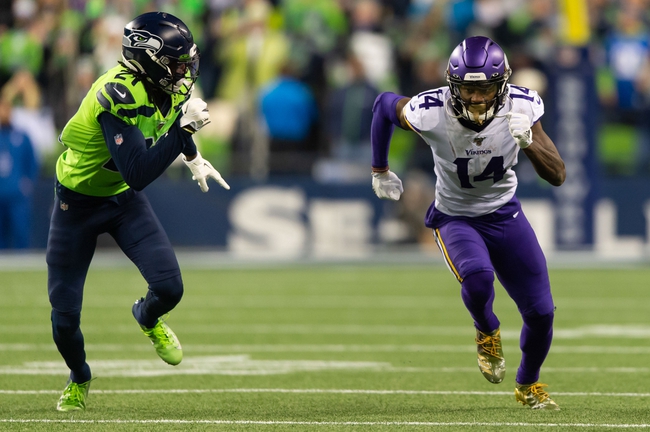 The Seattle Seahawks and the Minnesota Vikings meet in a Madden 20 NFL simulation game on Saturday night.

The Seattle Seahawks will be looking to build on a 37-12 win over the Minnesota Vikings in their last outing. Russell Wilson leads the Seahawks on offense with a strong 97 overall rating with 86 speed, 90 acceleration and 93 agility as well as 91 throwing power and 93 short pass accuracy, 94 medium pass accuracy and 96 deep pass accuracy. Tyler Lockett is Seattle’s top wide receiver with an 88 overall rating including 93 catching, 93 speed, 92 acceleration and 97 agility. Chris Carson also has an 86 rating at running back for Seattle with 88 speed, 89 acceleration and 91 stiff arm. On defense, Bobby Wagner is Seattle’s best defensive player at a 98 overall rating, with 96 tackling, 90 impact blocking, 98 power, as well as high-90s attribute ratings in pursuit and play recognition. Jadeveon Clowney is right behind on the defensive line at 88 overall with 95 pursuit, 91 play recognition, 87 speed and 90 acceleration.

The Minnesota Vikings will look to build on their 3-1 sim record after a 40-37 win over Philadelphia last time out. Stefon Diggs may be a Buffalo Bill, but he’s still on the Vikings in this game with a 93 overall rating with 92 catching, 91 speed, 93 acceleration and 93 agility. Adam Thielen has a 91 overall rating at another wide receiver slot with 90 speed and 93s in acceleration and agility as well. Thielen also has 95 catching and 90 catching in traffic. Dalvin Cook leads the Vikings in the backfield at 90 overall with 91 speed, 92 acceleration and 94 agility while Kyle Rudolph is rated 84 overall at tight end and Kirk Cousins is 84 overall at quarterback. On the defensive end, Harrison Smith leads at 95 overall with 93 power, 92 zone coverage, 95 play recognition and 93 pursuit. The Vikings have another group of 90 overall rated defenders, with Everson Griffen and Danielle Hunter bookending the D-line while Eric Kendricks hunkers down the linebacking corps. Linval Joseph also sits at 86 overall in the middle of the defensive line.

Points with the Vikings here are tempting, but the Seahawks have done a good job of putting down almost anyone that’s stepped in their way in these sim games. Minnesota has a pretty good 3-1 sim record, but the Vikings struggled big tim against the Saints, and I just think the Seahawks are as good as what New Orleans has brought to the table. I think the Seahawks win this one by at least a touchdown, so I’ll lay the points with Seattle here.