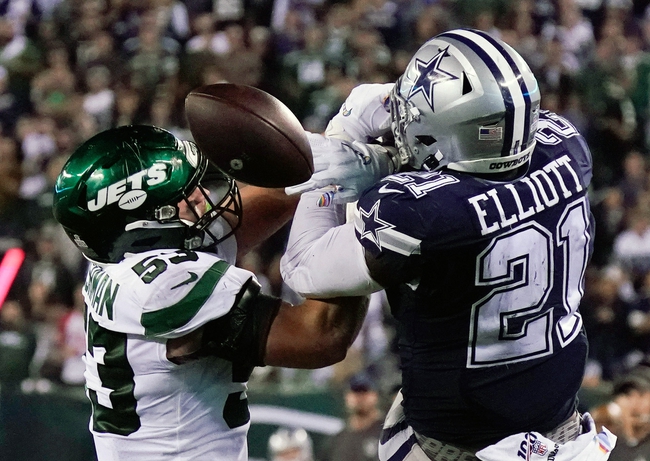 The Dallas Cowboys and the New York Jets meet in a Madden 20 NFL simulation game on Saturday afternoon.

The Dallas Cowboys will look to rebound from a 25-13 loss to the Arizona Cowboys in their last outing. Ezekiel Elliott leads the Dallas offense with a 93 overall rating at running back with 90 speed, 91 acceleration and 95 agility while Amari Cooper leads the Cowboys’ receivers at 91 overall including 92 speed, 96 agility and 89 catching. Dak Prescott has an 81 overall rating at starting QB with 87 throwing power and 88 short pass accuracy. The Cowboys also have some solid power on their offensive line, with Zack Martin logging a team-high 97 overall rating while Tyron Smith is at left tackle at 91 overall. On defense, Byron Jones and Demarcus Lawrence lead the Cowboys’ defense, each at 88 overall apiece, with Lawrence owning a 93 finesse move rating, 89 power move and 88 block shedding rating while Jones has 92 speed, 94 acceleration and 96 agility to go along with an 84 man coverage rating and 90 zone coverage rating in the Dallas secondary.

The New York Jets will look to build on their 3-1 sim record after a 34-13 win over Jacksonville last time out. Le’Veon Bell leads the Jets on offense at 88 overall, including 89 speed, 92 acceleration and 95 agility as well as 88 carrying and 91 juke. Robby Anderson is the top man in New York’s receiving group at 84 overall with 91 catching while Sam Darnold is at74 overall as the Jets’ starting QB. On defense, Jamal Adams leads the Jets with a 92 overall rating, with 95 power and 92 zone coverage as well as 91 speed and 90 acceleration. The Jets also possess a pair of 85 overall rated middle linebackers in C.J. Mosley and Avery Williamson, with both boasting 89 acceleration and Mosley having 91 tackling while Williamson has 86 block shedding.

I get Dallas being favored here, but the Cowboys were also double-digit favorites against the Cardinals and Dallas lost by double figures in that game. The Jets aren’t a great team by any stretch and Dallas has the better rated team here, but there’s nothing based on the results to really justify the Cowboys laying these points here. I think the Jets can keep this scoreline fairly respectable, so I’ll take a shot with New York and the points here.