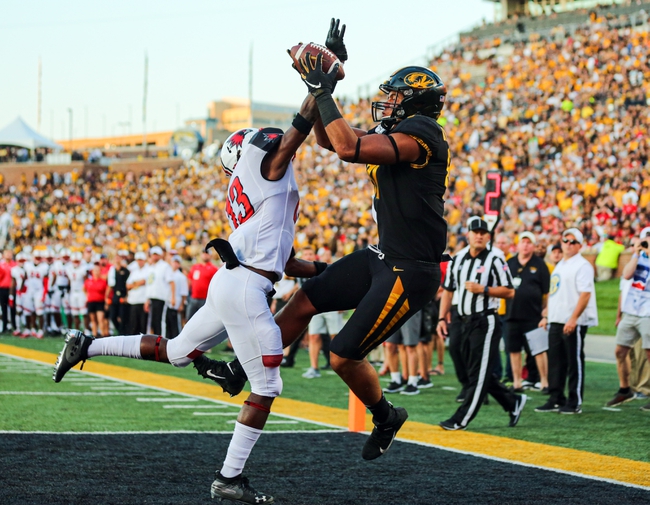 Albert Okwuegbunam comes into the 2020 NFL draft as one of the more well-known names at tight end, especially within SEC circles, not only for his unique last name, but for his combination of size and athleticism that made him a consistent touchdown threat in his three seasons at the University of Missouri.

College Career: Okwuegbunam had a solid freshman season, logging 11 receiving touchdowns, but then came the dropoff in scoring production as Okwuegbunam had 6 touchdowns in each of the next two seasons. Okwuegbunam has 43 catches for 466 yards in 2018, both personal-highs, but when Drew Lock left for the NFL after the 2018 season, a change in QB to former Clemson QB Kelly Bryant hurt Okwuegbunam’s production, logging just 26 catches for 306 yards. All of this while being part of two Missouri teams that reached bowl games while going 21-17 over those three seasons.

Strengths: Okwuegbunam is an athletic freak, especially for a tight end, standing 6’5” and 258 pounds. Combine numbers aren’t a huge thing for me personally, but Okwuegbunam did run a stunning 4.49 second 40-yard dash at the combine, blowing scouts minds that he could get to that speed that fast. Okwuegbunam has the speed to get downfield on his routes and his size lets him shield off incoming defenders or make catches in traffic against smaller defensive backs. Secondary defenders will have issues with his size and linebackers who are matched up will have trouble with his speed, making him a matchup nightmare.

Weaknesses: As good as Okwuegbunam is in the offensive, especially when it comes to running routes and catching balls, he can be viewed as equally as inept when it comes to blocking skill. Okwuegbunam looked by many to have regressed with his blocking in 2019, as he looked disinterested with blocking at times and even when he was interested, he wasn’t good and improvement is a necessity at the pro level.

Outlook/possible fit: Okwuegbunam has the same kind of build as a Rob Gronkowski and/or Jimmy Graham, as all three are good at hauling in receptions, but like Graham, Okwuegbunam isn’t a good blocker to say the least. If teams want an athletic tight end that can instantly add another dimension to their offense moving the ball downfield, while also having patience to work with him on his blocking, then Okwuegbunam could be a steal in the draft in the later rounds. As far as a fit goes, I could see OKwuegbunam landing with the New York Giants. Rhett Ellison just retired, leaving a void for the G-Men at tight end, and they have so much going wrong with that team, I think they’d be willing to look past Okwuegbunam’s blocking issues for the first little bit to at least get Daniel Jones another target to throw towards, to at least help move the ball downfield with more consistency.