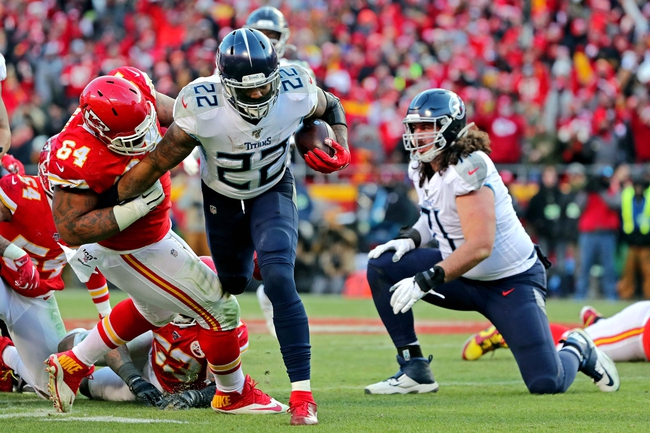 The Tennessee Titans and the Baltimore Ravens meet in a Madden 20 NFL simulation game on Sunday night.

The Tennessee Titans will look to rebound from back-to-back simulation losses after a 30-27 overtime loss to Jacksonville last time out. Derrick Henry leads the Titans at 91 overall with 91 speed, 87 strength, 91 carrying and 98 stiff arm while Delanie Walker sits at 86 overall as the Titans’ top receiver and tight end with 86 catching. A.J. Brown and Corey Davis make up a solid tandem at wide receiver at 80 and 79 overall respectively, while Ryan Tannehill comes in at 80 overall at starting quarterback for the Titans. Defensively, Kevin Byard shares the team-high on the defensive end at 91 overall with 93 zone coverage and 90 speed while Logan Ryan is at 86 overall at cornerback with 87 speed, 91 acceleration and 90 agility with 92 play recognition. Jurrell Casey also comes in at 85 overall at right defensive end with 92 play recognition, 89 tackling and 89 impact blocking as well as 92 strength.

The Baltimore Ravens will look to pick up some steam after a 43-17 win over the Cleveland Browns on Saturday. Lamar Jackson leads Baltimore’s offense at starting QB with a 92 overall attribute rating, with 92 throw power and 92 short pass accuracy to go along with 96 speed, 96 acceleration and 95 agility. Mark Ingram II comes in at 86 overall in the Baltimore backfield with 88 speed, 91 acceleration and 89 carrying while Mark Andrews is close behind at tight end with an 85 overall rating. On the defensive side, Earl Thomas III leads the Ravens with a team-high 93 overall rating, including 92 jumping and 96 zone coverage at free safety. Michael Pierce is a solid 91 overall on the defensive line with 94 block shedding and 90 impact blocking while Marlon Humphrey and Marcus Peters bring forth a strong cornerback duo at 89 and 85 overall for Baltimore. Humphrey owns a 90 man coverage rating as well as 92 speed and 93 acceleration while Peters has 87 man coverage, 91 speed and 91 acceleration.

The points with Tennessee are tempting given that Baltimore’s looked slightly overrated with some pretty disappointing losses considering all the high-rated talent on the team. However, the Ravens exorcised some demons against Cleveland, and showed some real signs of life on defense, while Tennessee has had some bad losses of their own, and I just don’t think the Titans, even with Henry and co. will have enough to hang with the Ravens here. I’ll lay the points with Baltimore in this spot.