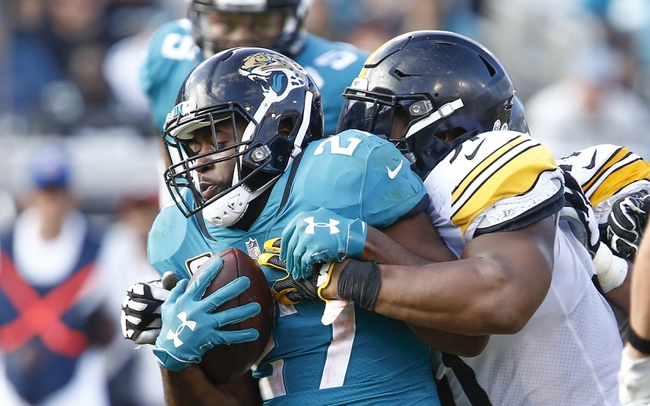 The Jacksonville Jaguars and the Pittsburgh Steelers meet in a Madden 20 NFL simulation game on Sunday morning.

The Jacksonville Jaguars will look to bounce back after falling to 3-3 in sim play with a 34-13 loss to the New York Jets in their last outing. Leonard Fournette leads the jaguars on the offensive end with an 83 overall rating with 92 speed and 96 carrying. D.J. Chark Jr. sits at 81 overall ithe at wide receiver with 91 catching as well. On defense for Jacksonville, each level of the Jaguars’ defense has a player rated at 84 overall, with A.J. Bouye leading the secondary, Telvin Smith in the linebacking corps and Yannick Ngakoue up front in the trenches. Bouye owns an 89 speed rating with 94 acceleration and 91 agility while Smith has 87 speed with 89 acceleration and 88 agility.

The Pittsburgh Steelers will look to build on back-to-back wins after a 38-10 win over the Cincinnati Bengals in their last outing. JuJu Smith-Schuster leads the Steelers’ offense in the receiving group with an 86 overall rating, which includes a rating of 91 speed and 92 acceleration as well as 90 catching and 93 catching in traffic while James Conner starts at running back with an 81 overall rating with 86 speed, 89 acceleration and 89 carrying. Ben Roethlisberger is at starting QB with an 81 overall rating with 89 throwing power and 89 short passing accuracy. Defensively, Cameron Heyward leads the Steelers at 90 overall with 93 strength, 91 tackling and 92 power move while Stephon Tuitt is on the other side of the front at 87 overall with 90 block shedding and 91 strength.

Laying anything around a touchdown in a sim game is a tough call as a lot of these games are coin flips and the computer aspect means unusual things can occur all of the time. However, Pittsburgh has done a good job beating up on lesser teams, and also have some pretty solid wins over top-tier teams as far as the game’s ratings go. Jacksonville has some decent wins, but the Jags have been getting beat up on lately, so given what I’ve seen from both teams, I’ll lay the points with Pittsburgh in this matchup.