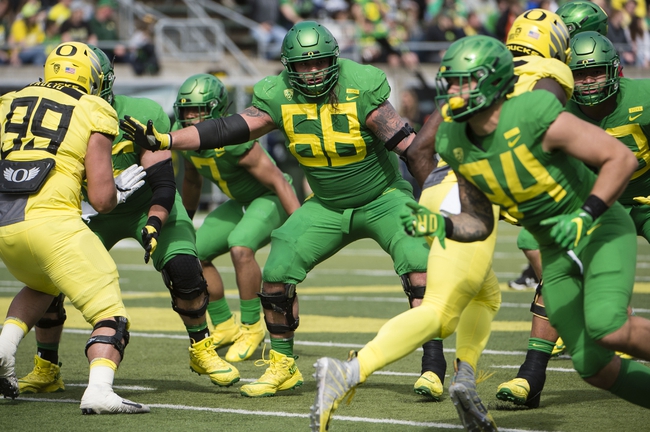 Shane Lemieux is a guard out of Oregon who is expected to be an early-to-mid-round selection in the 2020 NFL Draft. Lemieux has been a durable fixture on the Ducks’ line for the past four years, and he’ll get plenty of interest from potential NFL teams when they're on the clock.

College Career: Lemieux came from Washington, so it’s a bit odd that he ended up with Oregon. The Ducks were fortunate to have him though, as he started all 52 games in the left guard spot as the only steady presence on that line.

Strengths: Lemieux has a ton of football experience already, and he’s certainly intelligent enough to take his play to the NFL level. He has a broad, powerful chest and good proportions for an offensive lineman, and his leadership qualities make him a valuable asset in the locker room.

Lemieux executes drive blocks well, with a sustained push to keep defenders at bay. His technique work with his upper body is steady, and he’s agile enough to slide right along with shifty opponents. Lemieux’s hand work is also good, and he’ll reset his positioning during a play to regain leverage if necessary.

Weaknesses: Though Lemieux has a powerful frame, his arms are a bit short, and he could use some work keeping his pad level consistent. His lateral movement is slower than some, and in pass sets he has balance issues with his wide base.

Lemieux could probably use some more practice field work with twisting rush scenarios, as he can be knocked out of position with crafty spin moves. The good news here is that there isn’t a ton for Lemieux to clean up, and some effective coaching would go a long way toward his NFL success.

Possible Fits: Lemieux's stock is something of an enigma; mock drafts have him all over the place, and how high he goes will depend heavily on individual team needs and how well scouts like him. There will be a lot of different possible scenarios to play out, but I think he’s a second- or third-round talent and should come off the board somewhere in there.

One interesting spot for Lemieux to potentially land is Houston at No. 40 overall. This will be the Texans’ “DeAndre Hopkins” pick, and it would make lots of sense to grab Lemieux here to help protect Deshaun Watson—that line could use some upgrades.

Provided Lemieux falls a little further, there are some opportunities for him to go in the third or fourth round. Detroit has the No. 85 overall pick and could be thinking O-line there, or it’s also conceivable that Lemieux may still be on the board in Round 4; the Lions could grab him at No. 109 overall.