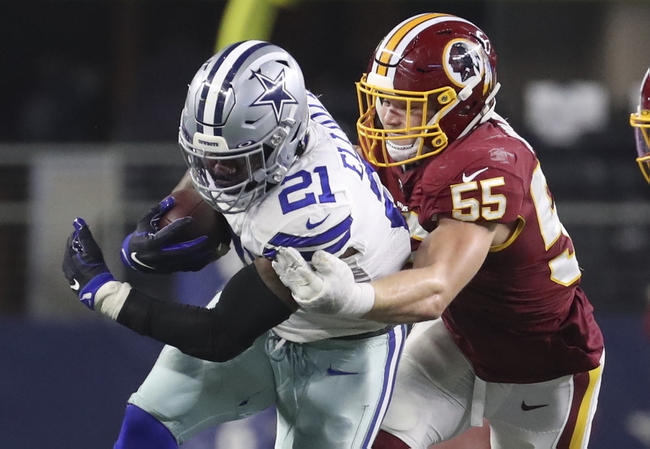 The Dallas Cowboys and the Washington Redskins meet in an NFC East division matchup in a Madden 20 NFL simulation game on Sunday afternoon.

The Dallas Cowboys will look to build on a 30-10 win over the New York Jets last time out. Ezekiel Elliott leads the Cowboys’ offense, rated 93 overall at running back with 90 speed, 91 acceleration and 95 agility while Amari Cooper leads Dallas’ receiving corps at 91 overall with 92 speed, 96 agility and 89 catching. Dak Prescott has an 81 overall rating under center at starting QB with 87 throwing power and 88 short pass accuracy. The Cowboys also have some muscle on their offensive line, with Zack Martin boasting a team-high 97 overall rating while Tyron Smith is at left tackle at 91 overall. On the defensive end, Byron Jones and Demarcus Lawrence lead the Cowboys’ defense, each at 88 overall apiece, with Lawrence poessessing a 93 finesse move rating, 89 power move and 88 block shedding rating while Jones has 92 speed, 94 acceleration and 96 agility to go along with an 84 man coverage rating and 90 zone coverage rating in the Dallas secondary.

The Washington Redskins will be looking to rebound from a 63-7 beatdown loss to Chicago last time out. Washington’s greatest strength lies on their offensive line, with Trent Williams coming in with a 92 overall rating including 95 strength, 92 pass block and 93 run block while Brandon Scherff is 88 overall with 90 run blocking and 92 strength. Jordan Reed comes in as the Redskins’ top receiver at 84 overall with 87 catching and 87 catching in traffic. Terry McLaurin sits at 81 overall and Derrius Guice leads the backfield at 80 overall at running back, sharing the work with Adrian Peterson who is at 79 overall. Dwayne Haskins Jr. remains Washington’s starting QB despite just a 70 overall rating. Defensively, Matt Ioannidis leads the Redskins’ D with an 85 overall rating with 86 acceleration and 86 strength to go along with 84 tackling and 89 power moves while Ryan Kerrigan is at 84 overall at outside linebacker with 88 power move, 88 impact blocking and 86 acceleration.

This feels like a ton of points to give up in a sim game, and one between a pair of division opponents. However, Dallas has shown that they can beat up on the teams that by all intents and purposes, they should beat given the high rated talent on their roster. Washington has some solid players as well, but with Haskins leading the way and after seeing how the Redskins were demolished by Chicago, I feel like the only option here is to lay the points with Dallas here.