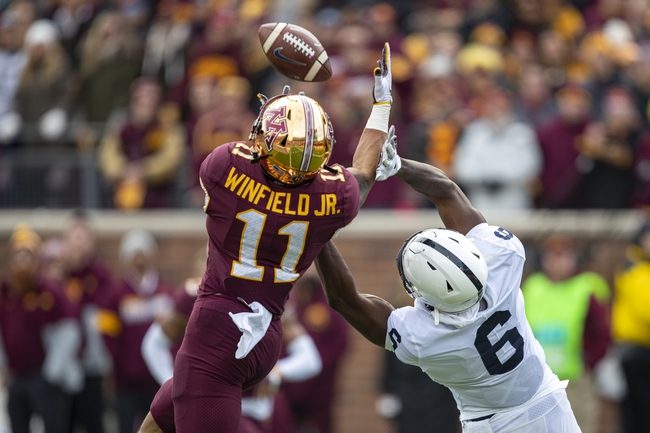 Antoine Winfield Jr. is a safety out of Minnesota who is expected to be an early-round selection in the 2020 NFL Draft. As the son of a former NFL Pro Bowl cornerback who shares his name, Winfield has plenty of recognition and natural talent that will make him a highlight of conversation on draft day.

College Career: Playing high school ball in Texas, Winfield was the Montgomery County Player of the Year in his senior season, then committed to the University of Minnesota. As a true freshman with the Gophers, Winfield played in 12 games and made nine starts. He posted 52 tackles, an interception and a fumble recovery for a touchdown. In both 2017 and 2018 Winfield’s year was shut down by injuries after only four games in each season.

Strengths: Winfield is incredibly versatile, and he can play many different situations comfortably. He has above-average strength for his frame, playing with sharp instincts and good control at all times. Under the guidance of his father, Winfield has been studying tape for years and understands the nuances of a secondary better than most.

Winfield is a highly opportunistic player, and he’ll watch the quarterback to figure out the upcoming play. This puts him in great position to break on the ball when it’s thrown. As a tackler, Winfield is also solid. He’s focused and has a great knack for punching the ball out.

Weaknesses: The big drawback that’s going to come up here is Winfield’s durability, due to him missing time in both 2017 and 2018. Beyond that, height-wise he’s a bit undersized and isn’t as effective on jump balls as a lengthy receiver.

Winfield has limited range over the top, and needs better hip technique in transitions. His recoveries are slow when he gets faked out, and as a tackler he’s limited due to his size. Winfield needs to have precise footwork and technique to make the most of his other gifts, but he’ll get great guidance from his father.

Possible Fits: Some mock drafts out there have Winfield going in the first round. He’s ranked as high as No. 26, which is where one of Miami’s picks lies. I feel like that’s a bit high to take him, and the Dolphins will likely favor a lineman there to protect their (presumed) quarterback pick earlier in the round.

More likely a scenario on Winfield is early in the second round. The Giants are sitting at No. 36 overall and could use some upgrades at the safety position. Winfield would get ample playing opportunities in New York.

The Dolphins pick again at No. 39, and if Winfield is still on the board there it would be a great spot to pick him up. Assuming he falls a little further the Bears have the No. 50 pick and probably would not pass on him. All things considered, we’re likely looking at an early second-round selection for Winfield, but he could surprise on day one due to his high upside and pedigree.