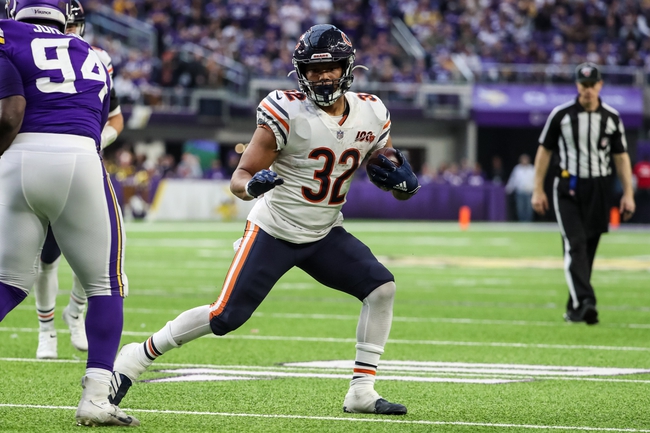 The Minnesota Vikings and the Chicago Bears meet in an NFC North division matchup in a Madden 20 NFL simulation game on Monday afternoon.

The Minnesota Vikings will look to build on back-to-back sim wins after a 30-27 overtime win over Seattle last time out. Stefon Diggs isn’t with Minnesota anymore, but he’s still on the Vikings in this game with a 93 overall rating with 92 catching, 91 speed, 93 acceleration and 93 agility. Adam Thielen has a 91 overall rating at another wide receiver slot with 90 speed and 93 grades in acceleration and agility as well. Thielen also has 95 catching and 90 catching in traffic. Dalvin Cook leads Minnesota’s backfield at 90 overall with 91 speed, 92 acceleration and 94 agility while Kyle Rudolph is an 84 overall rated tight end and Kirk Cousins is 84 overall at starting quarterback. On defense, Harrison Smith leads Minnesota at 95 overall with 93 power, 92 zone coverage, 95 play recognition and 93 pursuit. The Vikings have another group of 90 overall rated defenders, with Everson Griffen and Danielle Hunter bookending the D-line while Eric Kendricks hunkers down the linebacking corps. Linval Joseph also sits at 86 overall in the center of the defensive line.

The Chicago Bears will look to build on back-to-back sim victories after a 63-7 dismantling of the Washington Redskins last time out. Allen Robinson II leads the offensive attack for the Bears with an 89 overall rating with 90 speed and 93 acceleration as well as 96 catching while Trey Burton comes in at 82 overall at tight end and Taylor Gabriel is on the other side at wide receiver with an 81 overall grade. Tarik Cohen leads the Bears’ backfield at 78 overall while Mitch Trubisky is still Chicago’s starting QB at 73 overall. On defense, Khalil Mack leads the charge with a stacked 98 overall rating, with 87 speed and 89 acceleration along with 94 tackling, 90 impact blocking, 91 block shedding, 91 finesse move and 95 power move. Eddie Jackson is at 89 overall at free safety with a 94 grade in zone coverage and 90 acceleration while Kyle Fuller has 92 speed and acceleration at cornerback with 91 zone coverage and Akiem Hicks is at 88 overall at left defensive end with 91 block shedding and 89 power move.

I get that the Bears are solid defensively and are coming off of that whooping of the Redskins, but I truly don’t know why Chicago’s favored here. Outside of Robinson II, there’s not much to be excited for when it comes to the Bears’ offense. Minnesota at least still has Diggs, Thielen and Cook as well as a fairly solid defense in their own right. I’ll take Minnesota and the points as well as putting some on the Vikings on the moneyline.