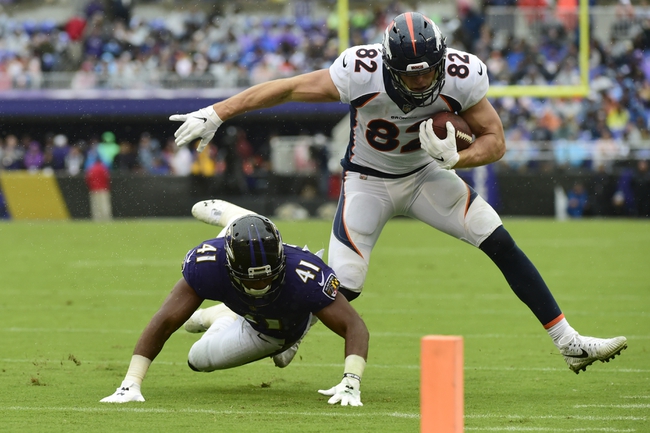 The Baltimore Ravens and the Denver Broncos meet in a Madden 20 NFL simulation game on Monday night.

The Baltimore Ravens will look to build on back-to-back sim victories after a 29-11 win over the Tennessee Titans last time out. Lamar Jackson is the Ravens’ leader on offense at starting QB with a 92 overall rating, with 92 throw power and 92 short pass accuracy to go along with 96 speed, 96 acceleration and 95 agility. Mark Ingram II comes in at 86 overall in the Baltimore backfield with 88 speed, 91 acceleration and 89 carrying while Mark Andrews is close by at tight end with an 85 overall rating. On the defensive end, Earl Thomas III leads the Ravens with a team-high 93 overall rating, including 92 jumping and 96 zone coverage at free safety. Michael Pierce is a solid 91 overall on the defensive line with 94 block shedding and 90 impact blocking while Marlon Humphrey and Marcus Peters bring forth a strong cornerback duo at 89 and 85 overall for Baltimore. Humphrey owns a 90 man coverage rating as well as 92 speed and 93 acceleration while Peters has 87 man coverage, 91 speed and 91 acceleration.

The Denver Broncos will try to snap their three-game losing streak in sim games after a 40-34 loss to Tampa Bay last time out. Phillip Lindsay leads Denver on offense at 85 overall at running back with 93 carrying as well as 93 speed and 91 acceleration. Courtland Sutton is right behind as Denver’s leading wide receiver with 89 speed, 92 acceleration and 92 catching as part of his 84 overall rating. On defense, Von Miller leads Denver with a team-high 96 overall rating, including 93 tackling, 89 impact blocking, 90 finesse move and 93 power move. Chris Harris Jr. is at defensive back at 90 overall with a 91 man coverage rating and 90 speed. Justin Simmons and Kareem Jackson make up a strong combination in the Denver secondary at 89 and 87 overall.

Points with Denver at home would’ve been tempting a couple games ago when Baltimore just looked like a team that was undeserving of their rating based on the play on the field, so to speak. However, the Ravens have really stepped it up in their last couple of games, allowing just 10.5 PPG, which is pretty good for a simulated game on the highest level of difficulty. I get that anything can happen in the sim games and they’re really a coin flip but this is a game that the Ravens should win by double figures so I’ll take the Ravens and lay the points.