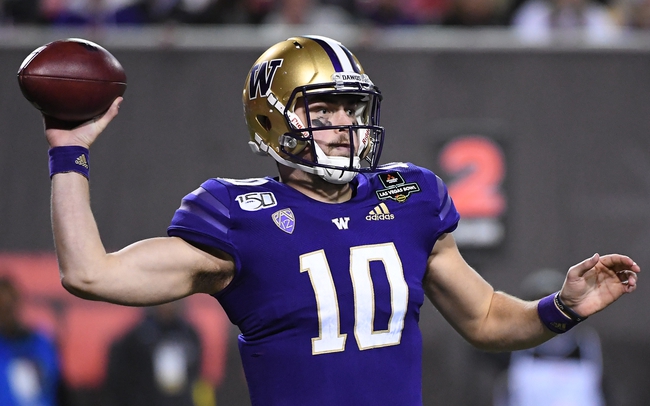 Jacob Eason comes into the 2020 NFL Draft as one of the more well-known quarterback prospects from his time with the Georgia Bulldogs before transferring to the University of Washington for his junior year.

College Career: Eason was a solid freshman for the Bulldogs in 2016, throwing for 2,430 yards, 16 touchdowns compared to 8 interceptions. Eason lost out for the starting job in 2017, deciding to enter the transfer portal and sit out a year before heading to the Pac-12 to join the Washington Huskies. In his lone season as Washington, Eason threw for 3,132 yards, 23 touchdowns and 8 picks on 64.2% passing, leading the Huskies to an 8-5 record and a win over Boise State in the Las Vegas Bowl.

Strengths: On the surface, Eason has the prototype build for what a lot of teams would like in a starting quarterback. Eason’s got size (standing 6’6”) and has an absolute cannon for an arm, and also an arm that’s incredibly accurate when you consider the amount of strength that comes along with it. Eason can fire the ball into the smallest of windows and use his power to stretch the field and beat defenders deep while also leading his receivers into space.

Weaknesses: Eason can fire the ball and fit it in tight spaces, but there are also issues that Eason has that will need to be worked out. He’s a raw talent that needs to learn when to use power and when to finesse the ball into space, instead on just relying on power to get the ball there. Eason can also move out of the pocket, but he’s not as agile as he thinks he might be and there’s always a risk that edge rushers will chase him down and could potentially sack him or poke the ball loose. Long story short, Eason is a work in progress, but has all of the tools for a team that’s patient enough to develop them.

Outlook/Possible Fit: Like I just said, there’s a lot to like about Eason and what he brings to the table, and if the assets are polished enough by the team that selects him, there will be a lot to love about him. However, if the issues aren’t corrected, Eason could be another QB to join the long list of highly-touted arms out of college to be relegated to an extended stay as a backup on any roster. There are a few teams I could see Eason landing with in the mid-to-later rounds, including the Green Bay Packers, Tampa Bay Buccaneers and Pittsburgh Steelers. All three teams have an old/aging QB that would be awesome for Eason to learn under for a year or two while polishing up his skill set, and all of these teams have at least one big play receiver that could help exploit Eason’s arm strength. For Green Bay, it’s Davante Adams, for Pittsburgh, JuJu Smith Schuster, and for Tampa Bay, it’s the duo of Mike Evans and Chris Godwin. Either way you spin it, Eason projects to be taken on the second day of the NFL draft and I culd see him being taken in the 3rd round personally.