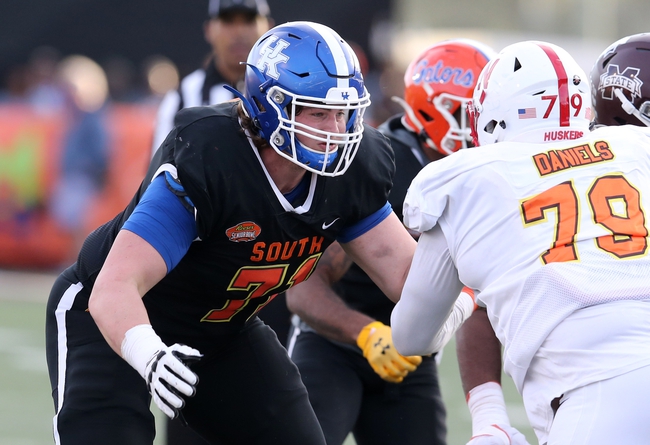 Logan Stenberg is an offensive guard out of Kentucky who is expected to be a mid-round selection in the 2020 NFL Draft. Stenberg proved himself a durable player with the Wildcats, starting every game in his final three seasons with the team.

College Career: Even though Stenberg is from Alabama and was one of that state’s top offensive line recruits, Kentucky reached down there and snapped him up. That decision paid off immediately for the Wildcats, as Stenberg jumped right in as a redshirt freshman to play in 12 games.

Stenberg became the starter in his sophomore campaign, a spot he wouldn’t give up for the next three seasons. In 13 starts during 2018, he helped Benny Snell Jr. ascend to first place on Kentucky’s all-time rushing list, and Stenberg had 13 more starts as a senior. He earned 2019 Second Team All-SEC honors for that year.

Strengths: “Dependable” and “reliable” are adjectives you’ll hear from scouts when they’re describing Stenberg. He has a good football IQ for his position, and fully understands his assignment in just about every situation. He’s a blue-collar workhorse, and approaches the game with a steady grasp of fundamentals.

Stenberg is feisty when he’s on the field, and has pretty good footwork when he’s being double teamed. His grip strength is strong and his stiff punching is solid. Stenberg improved his body control in 2019 and showed some nice leverage on most plays.

Weaknesses: Stenberg’s build isn’t quite ideal for the NFL level; he’s got shorter arms with a relatively narrow upper-body frame. He uses sneaky holds to sustain blocks way too often, and he’ll get into penalty trouble as a pro if he continues to rely on those methods.

Stenberg’s upper body strength could be improved, and his hand quickness is just average. As a pass protector in the NFL, Stenberg will have to focus at setting his edges better or he’ll be flummoxed by elite pro defenders.

Possible Fits: You’ll find Stenberg ranked all over the place in mock drafts, but he’s mostly in that Round 3-5 range. The upside here is pretty solid but he’s going to need some practice field work and improved technique to become a starter in the NFL. Still, there’s plenty for teams to like when it comes to drafting Stenberg, and he could plug in immediately on special teams or as a backup.

The highest Stenberg will likely go is the third round. Buffalo has the No. 86 selection and could use some help to bolster their offensive line ranks. Las Vegas is lurking a few picks later and could conceivably snatch him up at No. 91, and Tennessee is also a distinct possibility at No. 93 overall. That O-line unit of the Titans is pretty strong, and that would be a nice destination for Stenberg to mold himself into a quality NFL player.