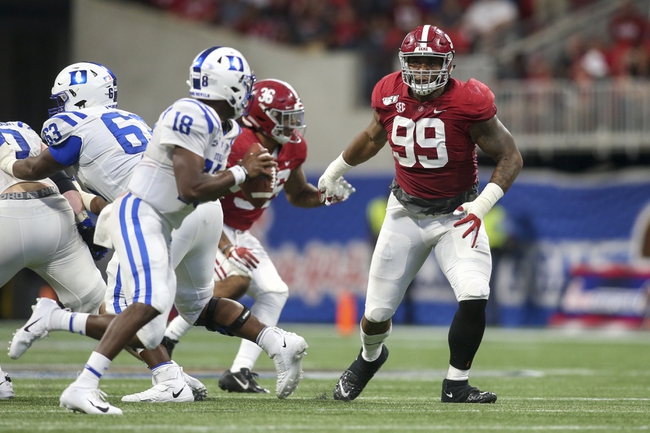 Raekwon Davis is a defensive tackle out of Alabama who is expected to be an early-to-mid-round selection in the 2020 NFL Draft. Davis was with the team in a whopping seven bowl games during his college years, so he’s already got that big-situation experience that will help him at the NFL level.

College Career: As a true freshman in 2016, Davis played in seven games. He was shot in the leg in August of 2017—thankfully a minor injury—but was able to make the Tide’s opener less than a week later. He made First Team All-SEC that year.

Davis continued to develop during his junior and senior seasons with Alabama, making Second Team All-SEC both those years. In his senior season he posted 47 total tackles, 0.5 sacks and three tackles for loss. Davis is a two-time SEC Champion (2016 and 2017) and helped the Tide win the CFP National Championship in 2017.

Strengths: Davis has some great physical traits. He’s tall, heavy and long as a top-level two-gap guy. His leverage is good, and he bends his body well to work his way around blockers. Davis uses his hands well; he’s quick and very strong with them.

Davis won’t give in against powerful opposition, and when he has to run he’s shown some good range. He delivers quality hits as a tackler and can overwhelm linemen who aren’t built to grapple with his size. Davis is pretty agile for a big guy and has a nice arsenal of moves to draw from.

Weaknesses: Davis’ maturity level is going to come up on any list of weaknesses. During his junior season, he suffered a well-publicized lapse in judgement when he threw a punch at Missouri lineman Kevin Pendleton during a game.

Beyond that, Davis' movement gets bogged down by busy legs at times, and he has a penchant for losing track of he football. Davis isn’t necessarily a big-time playmaker and is best utilized as a gap stuffer. He has some bad tape against LSU, where he appeared worn down in the second half. Davis’ pocket pursuit could also use some refinement as well.

Possible Fits: Davis has some great upside—especially if he finds the right situation. Despite his past behavioral issues and drawbacks, he should get selected in the second or third round of the 2020 NFL Draft.

An early spot for Davis to fit in would be the Bears at No. 50 overall. Chicago could use a big, aggressive guy like him to plug gaps alongside Akiem Hicks and Eddie Goldman. Davis would likely do well with the Bears.

Depending on how things shake out on draft day, Davis could also find a home elsewhere in the NFC North with Detroit at No. 67 overall. The Lions are expected to be taking a truckload of defensive guys in this draft, and provided they address CB and edge they could be looking Davis’ way with this pick.

Beyond that, I don’t see Davis lasting much past the Chargers at No. 71 overall. If LA is looking defense there his name will certainly be in play.