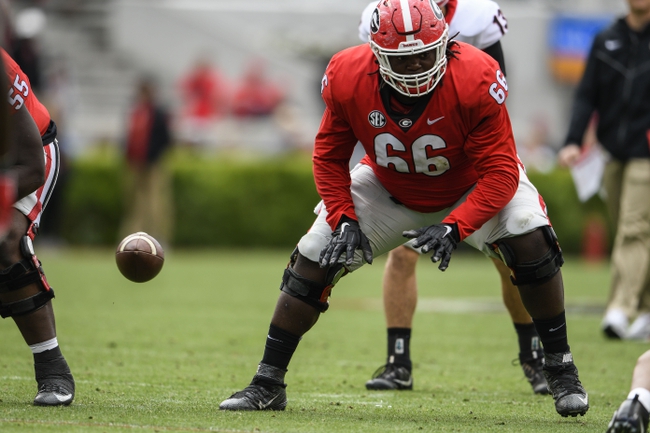 Solomon Kindley is a guard out of Georgia who is projected to be an early-to-mid-round selection in the 2020 NFL Draft. With four bowl games under his belt, Kindley has ample high-leverage experience that will entice many different NFL teams while they’re on the clock.

College Career: Kindley made Class AAA Second Team All-State playing high school ball in Jacksonville, then joined up with Georgia as a three-star recruit. He went redshirt in 2016, playing as a reserve in one game. Kindley made the SEC coaches’ All-Freshman team in 2017, starting seven of his 15 games played.

Kindley shared Georgia’s Most Improved Player award after starting 14 games in 2018, then he started 11 of 13 games in 2019 despite missing some time with an injury to his lower right leg. Kindley chose to forego his senior season of eligibility and declared for the 2020 NFL Draft.

Strengths: Kindley is a natural brawler, and likes to get defenders in close so he can overwhelm them with his wide frame. He’s got intangible gifts as a trash-talker and can psyche out an unsuspecting defensive lineman with relative ease.

Kindley’s footwork is solid, and he’s good at sliding over to wall off a lane. In pass protection he has pretty good hands, and can pop a less-than-nimble defender back without too much effort. Kindley has some pretty good tape against talented South Carolina DT Javon Kinlaw as well.

Weaknesses: Kindley needs to get his hands into better initial positioning coming off the snap, as he leads with his helmet too much and utilizes it in his blocks—that will lead to injury down the line. He also doesn’t have the greatest bend in his knees and doesn’t keep his opponents centered as well as he should.

Kindley’s acceleration is sub-par and his wide base opens up opportunities for defenders to get past him on counters. He needs to get his quickness refined (and possibly shed some weight) or else he’s going to have trouble with the more crafty NFL-level rushers.

Possible Fits: Kindley has some solid upside but he does need some coaching up and practice field work. Depending on what teams have in mind for him, Kindley may need to drop a few pounds and retool his techniques. That will probably mean he’ll come off the board in round three or four with the high-ceiling project guys.

Jacksonville has the No. 73 overall pick, and some mock drafts have Kindley going there. The Jaguars need an upgrade at right guard and Kindley could serve as a nice interior pass blocker as well as a reliable guy in a rushing situation.

Other mocks which are higher on Kindley have him going in the second round (which seems a little high), and are intriguing possibilities. One good fit could be Baltimore; they’re sitting at No. 55 overall. If the Ravens are impressed with Kindley’s tape and have a plan for him, he could be very effective in that offense.