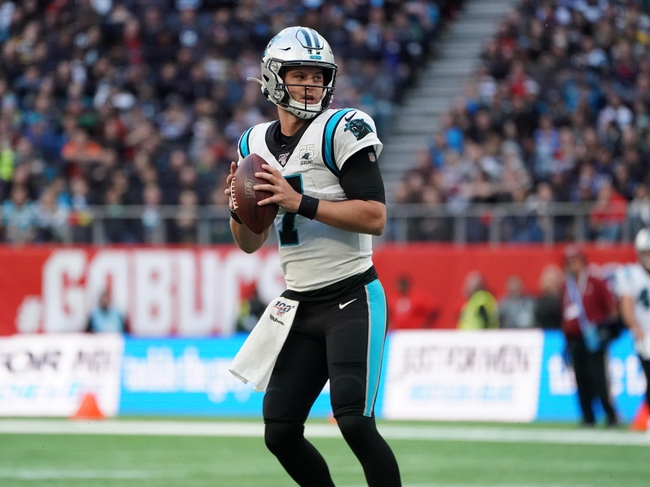 The Carolina Panthers and the Tampa Bay Buccaneers meet in an NFC South division matchup in a Madden 20 NFL simulation game on Monday afternoon.

The Carolina Panthers come into this game looking to remain unbeaten in sim games, sitting at 3-0 in simulation play after a 27-17 win over Atlanta last time out. Carolina is in an enviable position as the only team in this year’s Madden with two 99 overall rated players, and they have one on each side of the ball. Christian McCaffrey is the offensive star for the Panthers with 92 speed, 93 acceleration and 97 agility as well as 98 carrying and 96 juke. Greg Olsen comes in as 88 overall at tight end with 93 catching and 93 catching in traffic while D.J. Moore comes in at 85 overall with 93 speed and acceleration and 81 catching. Cam Newton’s injuries are no more but his overall rating is still down to 79 but he still remains the starting pivot for the Panthers. Defensively, Luke Kuechly holds onto the other 99 rating at linebacker, with 90 jumping, 91 impact blocking and 99 tackling as well as 99 play recognition and 96 pursuit. After Kuechly, Gerald McCoy and Kawann Short bolster the defensive line at 85 and 84 overall, with both possessing strength and impact blocking ratings in the low-90s.

The Tampa Bay Buccaneers will look to add to their current three-game sim game winning streak after a 40-34 win over Denver last time out. Mike Evans and Chris Godwin lead Tampa Bay’s offense as the Bucs’  top two receivers with Evans owning a team-high 92 overall rating with 90 catching, 95 catching in traffic and 97 spectacular catch while Godwin is 87 overall with 97 catching. Jameis Winston comes in at 78 overall at starting QB for Tampa Bay in this edition of Madden. Defensively, Lavonte David is Tampa Bay’s leading man at linebacker with a 90 overall rating, with 92 pursuit, 87 block shedding, 88 impact blocking and 89 tackling. Ndamukong Suh is up front at 86 overall with 93 impact blocking and Vita Vea is right behind alongside at 85 overall with 91 impact blocking.

I’ve gone back and forth on this game, as Tampa Bay’s beat some solid competition lately, but the thing about the simulation is that obviously, momentum isn’t a factor and it’s not really taken into consideration. Tampa Bay’s also put up their fair share of clunkers as well, while Carolina’s put forth solid efforts in each game they’ve played up to this point and looked good doing it. The other thing is like I said earlier. There are five 99 overall rated players here, and the Panthers have two of the five which is huge. I’ll lay the points with Carolina here.