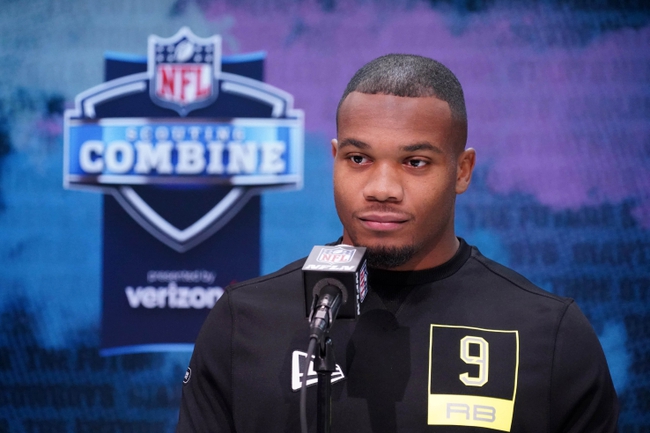 Who Will Be The First Running Back Drafted?

Jonathan Taylor, +200 - Jonathan Taylor is a power running back with quick feet and doesn’t go down easily. Taylor also seems to have a knack for running his best in the second half where he’s put many games on ice. If a team wants a gamer and a reelable runner who doesn’t disappear in pressure situations, Taylor is the guy.

J.K. Dobbins, +900 - J.K. Dobbins is an explosive running back with above-average speed and polished receiving skills. Dobbins cuts well in the open field and runs with great instincts that made him one of the scariest players for Ohio State. We don’t hear a lot about Dobbins as the first running back selected, but he’s one of the most explosive and will make some NFL team very happy.

A.J. Dillon, +50000 - A.J. Dillon is a big running back who doesn’t go down easily and runs faster than you’d expect for his size. Dillon runs patient behind the line and is effective in short yardage situations. The reasons you don’t hear Dillion being the first running back selected is because he’s not as powerful as his size suggests and he had 845 carries in three years at Boston College, so there’s a lot of wear and tear on those tires.

Pick: D’Andre Swift. We have to lay some juice here, but most believe Swift is comfortably the best running back prospect in this draft and some even believe he’s a better prospect than Sony Michel, Josh Jacobs and Nick Chubb. Swift is somebody who could contribute from day one and have a very productive career for about a decade. Jonathan Taylor isn’t as explosive as Swift and had a lot of reps at Wisconsin that makes him a tad bit less attractive. J.K. Dobbins has a similar skill set, but he lacks the size and the balance that Swift runs with.

Swift will be the first running back drafted in 2020 and getting -175 odds is a reasonable price to make some quick money.