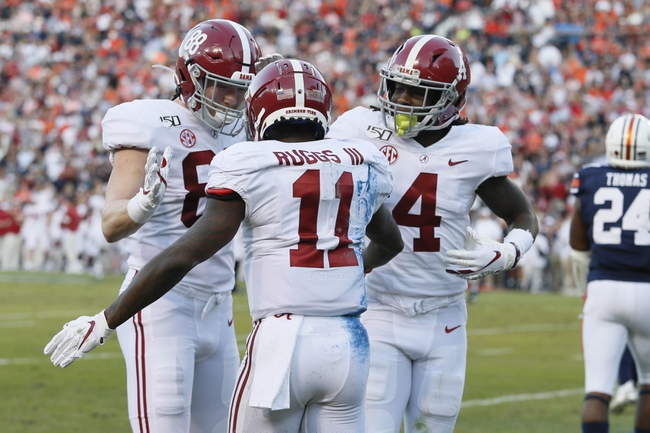 Who Will Be The First Wide Receiver Drafted?

bvThe 2020 NFL Draft is being widely regarded as one of the most talented and deep wide receiver classes in NFL history, and some books are giving out prop bet odds on who will be the first one taken off of the board. Let’s dive in a bit and see if we can find value here with any of the top 6 on the board.

Jerry Jeudy, Alabama, -110, Jeudy along with our next receiver, has been heralded as a can’t miss prospect and in most mock drafts leading up to the NFL draft, the top wide receiver available on the board. Jeudy’s a playmaker, a home run threat any time he’s on the field and a ball is headed his way. Jeudy has game-changing speed and looks to be a generational player at wide receiver for years to come.

CeeDee Lamb, Oklahoma, -110, Lamb is the other receiver in talks to be the presumed first wide receiver off of the board, as the talk amongst fans between himself and Jeudy has gone back and forth all season long. In 2019, Lamb had 62 catches for 1,327 yards and 14 touchdowns, and that was with a run-first QB in Jalen Hurts under center for most of it. Lamb is a major threat for yards after the catch and has solid height and athleticism to high point the ball and win the jump balls when needed.

Henry Ruggs III, Alabama, +325, I think Ruggs is a nice prospect as well and while he doesn’t get the recognition that a Jerry Jeudy might at the top of the board, the fact is that Ruggs III’s speed makes him a home run threat as well every time he sees the field, maybe even more so than the aforementioned Jerry Jeudy. The drawback on Ruggs III is his size, but I could definitely see Ruggs III being a quality over quantity receiver as he’s not going to be your volume catching receiver, but Ruggs III will break out a big play when need be.

Justin Jefferson, LSU, +5500, Jefferson is coming off of his breakout year as he was a major part in why the LSU Tigers won the national championship, posting 1,540 yards and 18 touchdowns on 111 catches this season. Jefferson’s threat comes in the red zone more often than not as his athleticism allows him to get vertical and high point the ball better than most defenders. The drawback on Jefferson is that he could stand to bulk up a bit and that he doesn’t have that top-tier speed to create separation, but I still see Jefferson being selected in the first round.

Tee Higgins, Clemson, +15000, Higgins’ skill set provides insane value here, as Higgins is 6’4” and has a dangerous set of skills for a receiver. Higgins can get up as high as anyone in the receiving class while being a threat in contested balls in the air and has length and size/stature to be a nightmare for opposing secondaries. The knock on Higgins is that he’s lean for his stature and doesn’t have the strength to bang on the outside with the defenders that stand across from him, but nothing that some time in the weight room can’t fix.

KJ Hamler, Penn State, +55000, Hamler is another receiver that is small in stature, standing only 5’9”, but he’s a a firecracker to say the least. His burst off of the line is crazy and is going to provide matchup nightmares for opposing defenders at the next level. Hamler is another receiver that’s a threat to always add yards after the catch. His size is hard to look past, but if anyone can, they’ll find a receiver that’s dynamic and electric to say the absolute least. The only concern though, like I said, is size as Hamler’s scrappiness can only take him so far before he has to find other ways of getting free.

My strongest lean for this prop is Jerry Jeudy at -110. Yes, we have to lay some juice, but it’s not a crazy amount we have to give up for the receiver that I can say I’ve seen go first off of the board in 80-90% of the mocks I’ve done/read. Like I said before, Jeudy is one of those game-changing receivers and could easily become the #1 receiver on whichever team drafts him right out of the gate. If you’re looking for a value play though, I’d also take a shot on Henry Ruggs III. I think I’d put Ruggs III slightly above Lamb because the competition and defenses that Ruggs III would’ve faced at Alabama are better than the ones that Lamb faced at Oklahoma as the Big 12 is widely regarded as an offensive league where the points come in bunches. Ruggs III isn’t going to be the set in stone #1 that Jeudy is probably going to be, but he’s a solid receiving option as well and provides value at +325.

The pick in this article is the opinion of the writer, not a Sports Chat Place site consensus.
Previous Pick
Denver Broncos vs. Indianapolis Colts - 4/21/20 Madden20 NFL Sim Pick, Odds, and Prediction
Next Pick
NFL Draft Prop Betting 2020: Team To Draft Jerry Jeudy