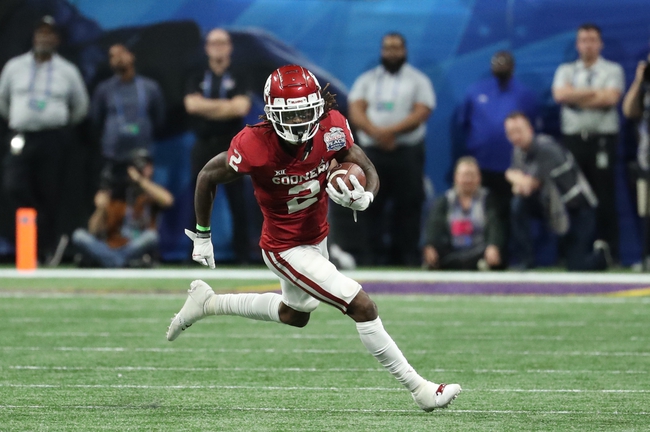 Who Will Be the New York Jets' First Draft Pick?

The New York Jets certainly have some key roster holes to fill in the 2020 NFL Draft. After losing Robby Anderson to free agency this offseason, the Jets will definitely be looking at wide receivers in the first round, but New York could also add some protection for franchise QB Sam Darnold with that initial pick. Let’s break down the main prop bets here and see what the Jets could do at No. 11 overall.

CeeDee Lamb, WR: +350 - Lamb is a popular mock draft selection for the Jets’ first pick, and he could certainly help the team immediately. With his explosive speed, Lamb can stretch the field and serve as a steady, reliable presence outside the hashes. At Oklahoma last season, Lamb bagged 1,208 yards and 14 touchdowns in 13 games and needed only 58 catches to do it. He’s a big-play guy, and New York could absolutely use one of those.

Mekhi Becton, OT: +400 - He’ll likely be the top OT off the board, so Becton may not even make it down to the Jets at No. 11, but if he does he may be too good to pass up. Becton has a big, powerful frame with fluid blocking movements and would really help QB Sam Darnold get those extra few seconds to throw, which would be invaluable for an offense struggling to find its rhythm. It’s worth pointing out that Becton’s drug test from the combine was flagged; whether or not that hurts his draft stock is something we’ll have to wait to find out. The initial speculation is that he likely won't fall further because of it.

Jerry Jeudy, WR: +425 - Jeudy is the other top wide receiver in this draft who the Jets will be looking at closely, and he’s got year-one NFL starter potential as well. He showcased some great speed and impressive route-running skills with Alabama, and is versatile enough to play inside or outside. Jeudy would make a great addition to the Jets; he led the Tide with 77 receptions last season, adding 1,163 yards and 10 touchdowns. The former Biletnikoff Award winner would be a stellar option for Darnold, and the two could potentially form an enduring tandem in years to come.

Andrew Thomas, OT: +450 - Thomas is the relative dark horse in this situation, but if he’s still on the board at No. 11 he’ll certainly be in play for the Jets. He’s got good size and talented footwork with great technique on his hand movements. Thomas is an awesome run blocker, and New York would benefit greatly from him opening big holes for Le’Veon Bell. Although the No. 11 spot is a little early for Thomas in most mock drafts, he’s got a high ceiling so it’s not out of the realm of possibility.

Pick: CeeDee Lamb. Although bagging a solid OT would be a smart and safe move for the Jets, they also need playmakers. The most glaring and obvious hole is at wide receiver, so it just makes too much sense for New York to pull the splashy skill position move.

Lamb is the top wide receiver off the board overall in most mock drafts, and those first 10 picks are expected to be filled with quarterbacks and guys who play on the line.

There’s a chance the Jets opt for Jeudy with their first-round pick, and it would be a great selection. That said, Lamb is considered to be a little more well-rounded and NFL-ready at this point. All things considered, I think New York plays it obvious here.