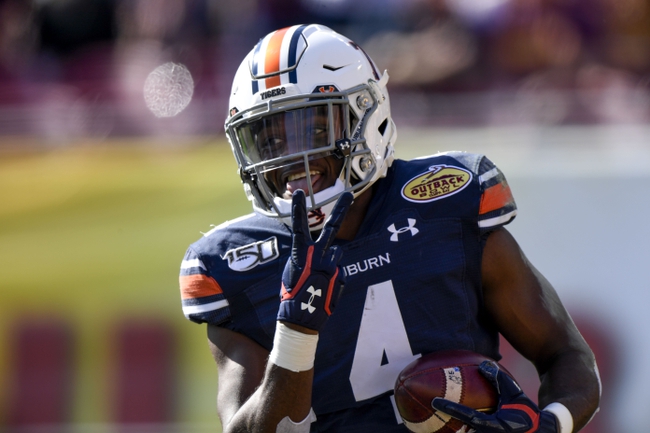 Noah Igbinoghene is a cornerback out of Auburn who is projected to be an early-round selection in the 2020 NFL Draft. Igbinoghene has college-level experience at both wide receiver and CB, so he offers a well-rounded perspective to potential NFL teams while they’re on the clock.

College Career: Igbinoghene played wide receiver in high school in Trussville, Alabama before committing to Auburn. He played the WR spot as a freshman, but then switched to cornerback prior to his 2018 season. Igbinoghene would play in the Music City Bowl at the end of that year, starting in nine of 13 games with 50 tackles and an interception.

Igbinoghene’s junior season saw him start all 13 games, posting 42 tackles, one tackle for loss and seven pass breakups. He also notched nine kickoff returns for 317 yards and a touchdown. Igbinoghene chose to forego his senior season of eligibility and declare for the 2020 NFL Draft.

Strengths: Igbinoghene is a very strong, physical cornerback with an athletic game and great explosiveness. He has a competitive streak ingrained in himself, and has really great practice and preparation habits. Igbinoghene is great at press jam coverage off the line, striking the receivers’ shoulders to gain position.

His height works in his advantage when it comes to a low center of gravity, as Igbinoghene can change direction in an instant. He has good acceleration and chases well, and good instincts when it comes to knocking the ball out at the catch point.

Weaknesses: Igbinoghene is unseasoned as a cornerback, as he has just two years playing the position in college. He doesn’t have the natural footwork capabilities some other CBs have and his movements are choppy in space.

Igbinoghene is “full go” pretty much all the time, relying on his feisty power and competitiveness as opposed to more of a fluid, finesse game. He needs to work on monitoring the quarterback better, and not getting flustered when he gets is back turned to the ball. The good news is that Igbinoghene can clean up a lot of this stuff with some technique work and coaching up.

Possible Fits: Igbinoghene is a bit of a project, but his natural skills and mental gifts are intriguing. Most mock drafts are pretty high on him, considering Igbinoghene to be a second- or third-round selection. He should go in that range with the rest of the high-upside guys who will need a little more experience before really showcasing their stuff in the NFL.

One nice spot for Igbinoghene to go is in the second round at No. 58 overall with Minnesota. The Vikings should be consciously revamping their secondary in this draft, and Igbinoghene would make a nice piece for that rebuild. A few picks later are the Titans with the No. 61 overall selection, and he’d fit in well with that talented Tennessee unit as well.

A little further down the board at No. 82 overall are the Cowboys, and a lot of mocks have Igbinoghene going there. I don’t think Dallas would pass him up if he’s still available.