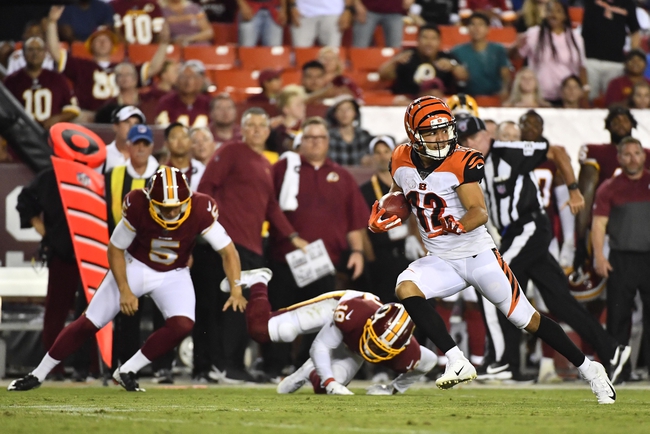 The Cincinnati Bengals and the Washington Redskins meet in a Madden 20 NFL simulation game on Tuesday afternoon.

The Cincinnati Bengals will still be looking for their first simulation victory after a 38-10 loss to the Pittsburgh Steelers in their last outing. A.J. Green leads the Bengals with a 90 overall rating at wide receiver, with 90 speed and 92 agility with 92 catching and 96 marks in catching in traffic and spectacular catch. Joe Mixon starts at running back for Cincinnati with an 87 overall rating with 91 speed and 93 acceleration while Tyler Boyd is 83 overall at wide receiver and Andy Dalton is starting at QB for the Bengals, but only has a 72 overall rating at the position. On defense, Geno Atkins leads the Bengals’ defensive line at 88 overall with 90 strength, 89 impact blocking and 90 power move. Carlos Dunlap is also at 82 overall on the defensive line while William Jackson leads the secondary at 81 overall.

The Washington Redskins will be out to snap a four-game sim losing streak after a 20-8 loss to the Dallas Cowboys last time out. Washington’s greatest asset is their offensive line, with Trent Williams coming in with a 92 overall rating including 95 strength, 92 pass block and 93 run block while Brandon Scherff has an 88 overall rating with 90 run blocking and 92 strength. Jordan Reed comes in as the Redskins’ top receiver at 84 overall with 87 catching and 87 catching in traffic while Terry McLaurin comes in at 81 overall and Derrius Guice leads the backfield at 80 overall at running back, sharing the work with Adrian Peterson who is at 79 overall. Dwayne Haskins Jr. is the Redskins’ starting QB despite just a 70 overall rating. Defensively, Matt Ioannidis leads the Redskins’ D with an 85 overall rating with 86 acceleration and 86 strength to go along with 84 tackling and 89 power moves while Ryan Kerrigan is at 84 overall at outside linebacker with 88 power move, 88 impact blocking and 86 acceleration.

I’m not going near this game with a ten foot pole. However, while Washington has the greater number of skill players on both sides that can make plays, I just don’t trust the Redskins with Dwayne Haskins at QB. I mean we’re seeing these sim games where even bad teams like Detroit are putting up 15-20 points, and the Redskins have put up 15 in their last two games. On the other hand, Cincinnati’s been getting pummelled in their own right and while A.J. Green and Joe Mixon can be game changers, I’m not sure I can rely on Cincinnati either. Instead, I’m going to side with the under. I don’t know who’s going to score more in this stink-fest, but I just don’t see it going over 45 points. Give me the under here.