2020 NFL Draft Prop Bets: How Many Alabama Players Will Be Taken In The First Round? 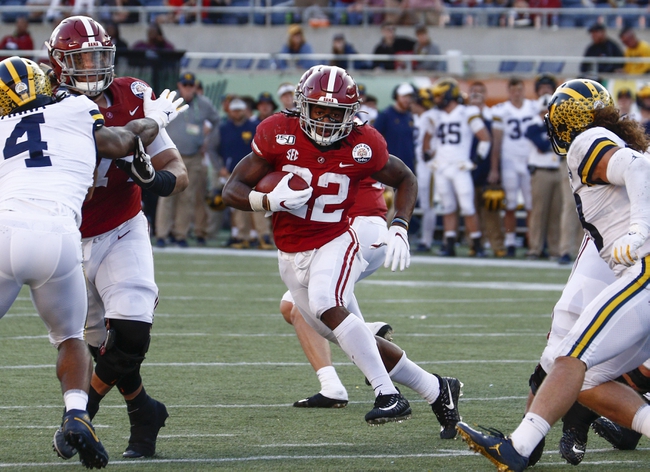 How Many Alabama Players Will Be Taken In The First Round Of The 2020 NFL Draft?

The Alabama Crimson Tide have turned into a factory of producing first-round NFL talent, especially in the Nick Saban era, where Alabama has had 29 players selected in the first round since 2009, including guys you might have heard of, like Julio Jones, Dont’a Hightower, Dre Kirkpatrick, Mark Ingram, Amari Cooper, Ha-Ha Clinton-Dix and Josh Jacobs just to name a few. 2020 is shaping up to be another one of those years where multiple Alabama players are taken in the first round, so let’s take a look at this prop to see if we can make some more money on the Crimson Tide.

Let’s look at some of the players that should/could be taken in the first round.

Tua Tagovailoa, QB, the question has not been if, but where in the top 6 picks will Tagovailoa be taken, as Joe Burrow to Cincinnati seems pretty locked in and it’s just a matter of if the Dolphins or Chargers want to trade to get ahead of one another to draft their next franchise QB that they’re projected to go after. Either way, Tua apparently has the go-ahead going forward health-wise, and he’ll be a top-10 pick in this draft.

Jedrick Wills, OT, I’ve seen several mock drafts and done one myself where Wills floats around picks 9-11, and all of those teams could use offensive line help, as it’s Jacksonville, Cleveland and the New York Jets at those three slots. Wills is a bit of an undersized tackle, but he makes up for it with solid footwork and agility. I wouldn’t be surprised to see Wills to go as high as #8 to protect Kyler Murray in Arizona, but either way I see Wills as a top-10 pick or around 11 at worst.

Jerry Jeudy, WR, Jeudy leads a stacked wide receiver draft class as the 2018 Biletnikoff award winner and one of the most complete receivers in the class. Jeudy’s a speed threat, a constant home-run hitter with solid route running skill and side-to-side agility/quickness. All of my mocks and mocks I’ve read have Jeudy going either 12th to the Raiders or 13th to San Francisco (If they keep that pick) so pencil Jeudy in as another first-rounder.

Henry Ruggs III, WR, Ruggs is another speed receiver that the Tide used really well last season. He won’t be a volume receiver like a DeAndre Hopkins or Michael Thomas that lead the league in receptions in triple digits year after year, but Ruggs will get you plenty of downfield yardage and will get his fair share of big plays. Give Ruggs III space as a defender, and it’ll be the last thing you do before heading back to the sidelines watching him in the end zone. Ruggs III has been floating around picks 14-17 in the mocks, so make that another Bama first-rounder.

Xavier McKinney, S, McKinney is the first Tide player I’ve had mixed placement with, seeing many boards having him go in the first round as high as 18 to Miami, at 21 to Philadelphia or even 23rd to New England. However, McKinney’s also shown up as an early 2nd round pick in some boards. I’m not sure why though. McKinney is the best safety prospect in this year’s draft, he’s the total package at safety. He can step up and be physical against the run or drop back and handle zone coverage. I’m one of the people who has McKinney going somewhere in the 20s as Alabama’s 5th first-rounder.

Trevon Diggs, CB, Diggs is another player I’ve seen scattered in multiple mock drafts, some going as high as 20 to Jacksonville, which makes sense considering that the Jaguars are trying to rebuild their team and specifically their defense after tearing it down and Diggs would be the replacement for Jalen Ramsey, and all the way down to San Francisco at 31 to bolster a solid 49ers’ defense, I mean imagine Trevon Diggs across from Richard Sherman. I’ve also seen boards that have Diggs as a mid-to-late- second round pick. Again, not sure why. Diggs is a big, strong corner at 6’1” and 205 pounds, also offering speed downfield and the ability to keep up with receivers running downfield, as was shown by his recording 3 interceptions in 12 games in his senior year. I think Diggs shows up in the later picks in the 1st round, making it six first rounders for Bama.

Pick: The magic number here is 5.5, so if you’ve been reading up to this point and can count, I’m at six first rounders, making this an easy over for me and the fact that we’re getting plus money makes it that much sweeter. I could easily see these six guys all being gone by 25th overall, I think we could get a bit nervy with McKinney and Diggs, but I still think they’re first round guys as well, so give me the over.