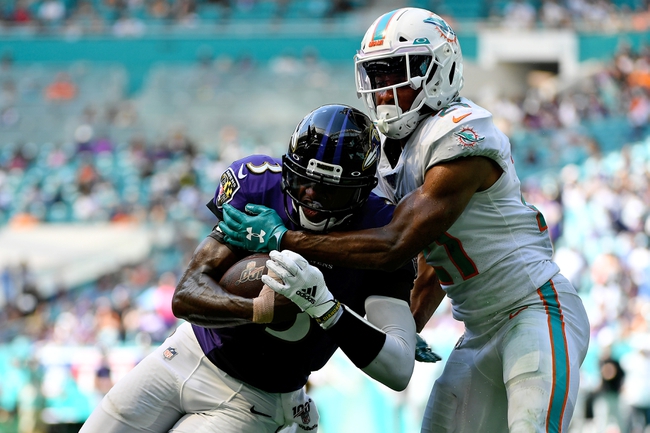 The Baltimore Ravens and the Miami Dolphins meet in a Madden 20 NFL simulation game on Wednesday night.

The Baltimore Ravens will look to bounce back after a 37-30 loss to the Denver Broncos in their last outing. Lamar Jackson is the Ravens’ offensive leader at starting QB with a 92 overall rating, with 92 throw power and 92 short pass accuracy to go along with 96 speed, 96 acceleration and 95 agility. Mark Ingram II comes in at 86 overall as Baltimore’s top RB with 88 speed, 91 acceleration and 89 carrying while Mark Andrews is close by at tight end with an 85 overall rating. On the defensive end, Earl Thomas III leads Baltimore with a team-high 93 overall rating, including 92 jumping and 96 zone coverage at free safety and Michael Pierce is a solid 91 overall on the defensive line with 94 block shedding and 90 impact blocking while Marlon Humphrey and Marcus Peters bring forth a strong cornerback duo at 89 and 85 overall for Baltimore. Humphrey owns a 90 man coverage rating as well as 92 speed and 93 acceleration while Peters has 87 man coverage, 91 speed and 91 acceleration.

The Miami Dolphins will look to surprisingly remain unbeaten after improving to 3-0 in sim play with a 30-10 win over Buffalo last time out. Devante Parker leads the Dolphins with an 84 overall rating, including 91 speed and 91 acceleration while Albert Wilson is at 76 overall at wide receiver as well with 91 speed and acceleration as well. Ryan Fitzpatrick leads the charge at quarterback for Miami, but only at a 74 overall rating. On defense, three of Miami’s four 80+ rated overall players are all in the secondary, with Xavien Howard and Aqib Talib at 82 and 81 overall with Howard owning 92 speed and 92 acceleration while Talib has 91 acceleration and 91 agility. Reshad Jones is also at 82 overall at strong safety with 86 speed and 89 acceleration.

I’m not sure what it is, maybe it’s been a light schedule because Baltimore’s going to be Miami’s hardest game yet, but I think the Dolphins have a puncher’s chance here. The Ravens were looking like the powerhouse the game’s ratings made them look like they were going to be, and then Baltimore puts up a clunker, losing outright to Denver as a double-digit favorite. I get the Ravens being favored here, and rightfully so, but I have to at least give a look to the Dolphins given what I’ve seen from them in these sims so far. This game is going to be in the rain as well, so that might play a factor too. I’ll take a shot with Miami and the points here.