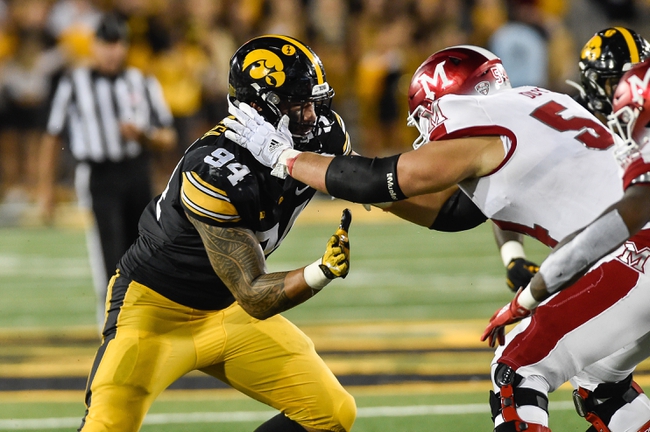 With What Pick Is A.J. Epenesa Selected?

Former Iowa defensive end A.J. Epenesa is predicted to be an early-round pick in the 2020 NFL Draft. Epenesa is one of the best pass rushers in this year’s draft, and his powerful, explosive play will entice many different NFL teams to give him their full attention.

College Career: Epenesa got right to work in his freshman season at Iowa, getting named to the All-Freshman Big Ten team with 15 total tackles and 4.6 sacks. He got even better as a sophomore despite not starting any games that year, posting 37 total tackles, 16.5 tackles for loss and 10.5 sacks with four forced fumbles.

As a junior, Epenesa continued his excellent productivity with 49 total tackles, 15.0 tackles for loss, 11.5 sacks and four more forced fumbles. He was named First Team All-Big Ten in both 2018 and 2019, then chose to forgo his senior season of eligibility and enter the 2020 NFL Draft.

Strengths/Weaknesses: Epenesa passes the eye test for an NFL defensive end: he’s big, strong and fast with long limbs and a great penchant for setting the edge. Epenesa produced very well in the big-money stat columns during his college career thanks to his excellent use of leverage and technique. He’s an NFL-ready guy right now.

As for the drawbacks, Epenesa is a little slow to gather himself when changing direction, and doesn’t quite have NFL-level lower-body bend or technique against double teams right now. On contains he needs to up his reaction time and could use some coaching up when it comes to shedding blockers. Quick and savvy professional OTs could silence Epenesa on the field until he develops some new moves in his toolbox.

Under 32.5 Odds (-180): Epenesa was projected as a first-round draft pick heading into his junior year, so the expectation has been pretty high on him for a while. Most mock drafts still have him in the first round.

Epenesa will likely come into play at about No. 17 with the Cowboys. Dallas needs another pass rusher after losing Robert Quinn, and Epenesa could do well there. A little further down at No. 22 is Minnesota, but they’ll more likely be looking CB there. Toward the end of the first round are two more possibilities in Seattle (No. 27) and Tennessee (No. 29). Either of those squads would be good landing spots for Epenesa.

Over 32.5 Odds (+140): The major thing working against Epenesa as a first-round selection is his rather poor showing at the Combine back in February. Realistically however, just looking at his tape and actual game speed should alleviate most of the concerns there.

Assuming Epenesa slips out of the first round, he could conceivably go to Detroit (No. 35), the Giants (No. 36) or the Texans (No. 40) but I just don’t think he’ll still be on the board then.

Pick: Going under here, and it’s not that tough of a decision. Given Epenesa’s immense upside and great college numbers, he may not even get past Jacksonville at No. 20 assuming the Cowboys pass on him at No. 17.

There are a few more teams who could use a high-ceiling edge rusher sitting in the 20s as well. Seattle, New England (No. 23) or Minnesota (Nos. 22 and 25) are all possible landing spots. I highly doubt Epenesa makes it out of the first round—let alone past No. 29 or so.