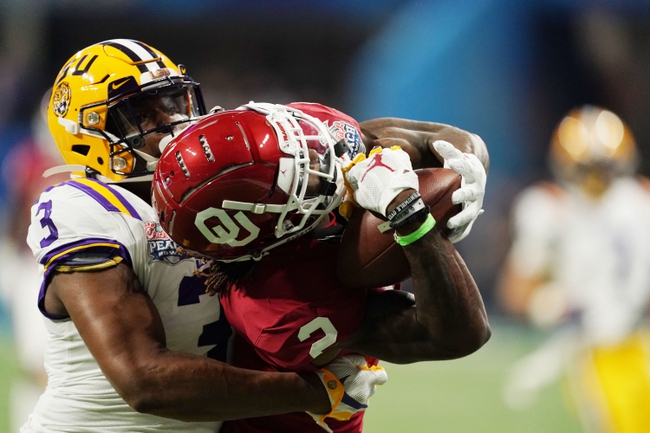 With What Pick is CeeDee Lamb Selected?

The 2020 NFL Draft will feature plenty of potential football stars finding homes in the first round, and one of those big names is wide receiver CeeDee Lamb out of Oklahoma. Lamb is projected to land just outside the top 10, and may be the first WR off the board in this draft.

Here’s a closer look at Lamb’s draft stock and his potential landing spots.

College Career: Lamb jumped right into the fray as a freshman with Oklahoma, starting 13 of 14 games and bagging 807 receiving yards (a school record for freshmen) and seven scores. That effort made Lamb a Freshman All-American and gained him national attention.

Lamb continued to blossom during his Sooners career, and put up 62 catches for 1,327 yards and 14 touchdowns in 2019. In that season he was a Consensus All-American and First Team All-Big 12. Lamb decided to forego his senior year of eligibility and declare for the 2020 NFL Draft.

Strengths/Weaknesses: Lamb is a versatile and valuable receiver; he can make plays on all three levels of the field, and after the catch he’s very dangerous if he gets some open field. In 2019 he averaged 21.4 yards per catch, utilizing his varied route tempos and play knowledge to fluster defenders. Lamb is also a potent punt returner and could slot right in on pretty much any NFL team.

As far as drawbacks, Lamb is a little slim for a No. 1 NFL receiver, and he hasn’t yet faced that elite pro-level competition that will test his abilities with every play. His press release isn’t quick enough for a pro player and he needs to learn how to find catch space on underneath routes. Lamb certainly needs refinement to be competitive at the next level of play, but he’s got a great ceiling and there’s plenty to work with here.

Under 12.5 Odds (-220): Obviously, there are myriad scenarios that could play out during the draft, but the odds here seem right on point. In order for Lamb to be selected before No. 13, he’s got two likely areas to land: the Jets at No. 11 and the Raiders at No. 12. Both teams need wide receivers badly, and a pick there would mean Lamb is the first (or possibly second after Jerry Jeudy) WR off the board.

Over 12.5 Odds (+155): Some mocks out there have Lamb falling past No. 12. For instance, the Jets could go OT with their first pick as protection for franchise QB Sam Darnold, and the Raiders could grab Jeudy. That would leave Lamb a little further down with a team like Denver (No. 15 overall), and I don’t think that rebuilding Broncos offense would pass on him if he’s there.

Pick: I have to stick with the under here. In order for Lamb to last past the Raiders at No. 12 it would probably mean the Jets went OT on that first pick and the Raiders grabbed Jeudy. It seems more likely that New York (who lost Robby Anderson in free agency and really have no wide receivers of note) will take either Jeudy or Lamb, and the Raiders will take whichever of those two WRs New York didn’t pick up. Both those teams need to make skill position draft splashes in the first round, and Lamb is the perfect way to do it.

The pick in this article is the opinion of the writer, not a Sports Chat Place site consensus.
Previous Pick
2020 NFL Draft Prop Bets: How Many Alabama Players Will Be Taken In The First Round?
Next Pick
Houston Texans vs. Buffalo Bills - 4/22/20 Madden20 NFL Sim Pick, Odds, and Prediction