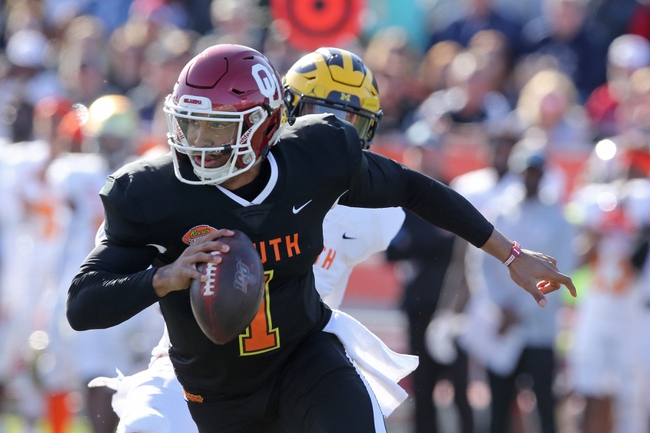 With What Pick is Jalen Hurts Selected?

Decorated quarterback Jalen Hurts is projected to be an early-round selection in the 2020 NFL Draft. With plenty of awards and big-game experience under his belt at both Alabama and Oklahoma, Hurts will have attention from many different NFL teams when they’re on the clock.

Here’s a closer look at Hurts’ draft stock and his potential landing spots.

College Career: Hurts had so many big games and notable scenarios in college that it would take a novel to list them all. He led the Tide to the national championship game as a freshman, starting 14 games with 2,780 yards, 23 touchdowns and nine picks. That effort earned him First Team All-SEC, Freshman All-American, SEC Freshman of the Year and Maxwell Award finalist honors.

Hurts would play with Alabama until 2019, when he transferred to Oklahoma. In that lone season with the Sooners he put up 3,851 passing yards, 32 pass TDs, 1,298 rush yards and 20 rush TDs—all college career-highs. Hurts finished second in Heisman Trophy voting that season to Joe Burrow.

Strengths/Weaknesses: Hurts generates a lot of Tim Tebow comparisons, in that he’s a dual-threat quarterback who is also a high-character leader on the field. His 38-4 record as a starter is one of Hurts’ many impressive statistics, and he’s won over lots of scouts with his toughness and durability. Hurts has solid velocity on his throws and is experienced in a variety of scenarios that should translate well to the NFL level.

On the downside, Hurts doesn’t sustain rhythm as a passer very well, and he can get impatient with developing routes. His recognition could stand to be faster, and he takes too many downfield risks when there are higher-percentage check-down throws available. Hurts is antsy in the pocket, and is more apt to break out on a run than he is to stay in and throw.

Under 54.5 Odds (-110): Most mock drafts out there have Hurts going in the late second round as a high-ceiling backup and potential future franchise QB. In order for him to be selected under No. 55 overall, he’s likely going to have to impress a quarterback-needy, forward-thinking team enough to reach on him a little bit, which isn’t that unlikely of a scenario.

The Chargers are a possible destination at No. 37 overall, provided they don’t go with a guy like Jordan Love. Beyond that, the Saints are an outside possibility in the first round or a trade-up in the second, but chances are New Orleans would have to reach a little too much to get Hurts.

Over 54.5 Odds (-130): Many mock drafts have Hurts as the fifth quarterback off the board in this draft. He’s projected to follow Joe Burrow, Justin Herbert, Tua Tagovailoa and Jordan Love—all potential first-round picks. After a brief QB lull in the second round, Hurts should lead off the high-upside guys who need some seasoning to be effective pros. Green Bay (No. 62) is a strong possibility here, as is Las Vegas (No. 80). Both teams could be thinking of grooming Hurts for an eventual face-of-the-franchise role.

Pick: I have to stick with the over here. I don’t think Hurts will be a part of that initial quarterback flurry in the first round, and then teams will shift their attention to high-upside WRs, LBs, CBs and edge guys for a while. When the proverbial dust settles there and teams start looking at QB again we should be firmly in the mid/late second round. I like the idea of Hurts going to Las Vegas; the Raiders may even trade up a little bit to get him, but I still think it’ll be past No. 54 overall.