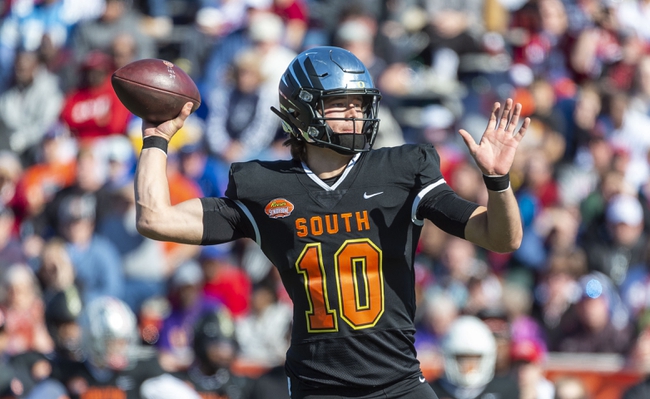 With What Pick Will Justin Herbert Be Selected?

Former Oregon quarterback Justin Herbert is projected to be a high selection in the 2020 NFL Draft, and he should be one of the first off the board at his position. Herbert has been called the most physically gifted QB in this year’s draft, so he’ll be the focus of many conversations on draft day.

College Career: Herbert’s grandfather was a wide receiver for the Ducks back in the 1960s, so he’s always had strong family ties to the Oregon program. During his 2016 season as a true freshman, Herbert became the team’s starter, finishing with 1,936 yards, 19 touchdowns and four picks. His 2017 campaign was derailed by a broken collarbone, but Herbert still managed 1,983 yards and 15 passing TDs.

Strengths/Weaknesses: Most scouts believe Herbert to be NFL-ready. He’s got great size, experience in pro sets and is able to scan the entire field before making a decision with the football. Herbert is great with play-action and his ball security is solid. He has good range and can fit his throws into some tight windows.

As far as drawbacks here, Herbert’s success as a passer wasn’t great over his final four games, and he’s more of a mechanics-based quarterback as opposed to a playmaker. His throws are sometimes flat and lack touch, and he misses leads on receivers too often. Still, Herbert is pretty well set for some big NFL opportunities.

Under 5.5 Odds (EVEN): Will Herbert be a top-five pick? That’s essentially what we’re deciding here. It’s generally considered to be a sure thing that Cincinnati will take Joe Burrow with that first overall pick, and assuming no one in that top-five range trades back Miami would have to take Herbert at No. 5 overall to get into the under.

The tough part here is figuring out if there are any teams who would be willing to trade up past the Dolphins to get to Herbert; the Redskins (No. 2), Lions (No. 3) or Giants (No. 4) could get an offer they can’t refuse and throw a wrench into the entire first round.

Over 5.5 Odds (-140): There’s a good possibility Herbert slips out of the top five. Even right afterward at No. 6 overall he could find a home with the Chargers. Beyond that, if Herbert lasts to No. 9, Jacksonville could scoop him up as competition for Gardner Minshew. There are lots of different scenarios that could play out, but Herbert falling out of the top 10 is in all likelihood not going to happen.

Pick: This one’s kind of tough, but I’m going with the over. I have the two QB-needy teams in the top five looking elsewhere—Cincinnati with Burrow and Miami with Tua Tagovailoa. In order for Herbert to make the under we would have to see a splashy trade-up, and I think the price of that will ultimately be too high for any team to bite on. In all honesty, this is probably one to stay away from due to all the false information and smokescreens out there. It'll be interesting to see how things shake out, though.