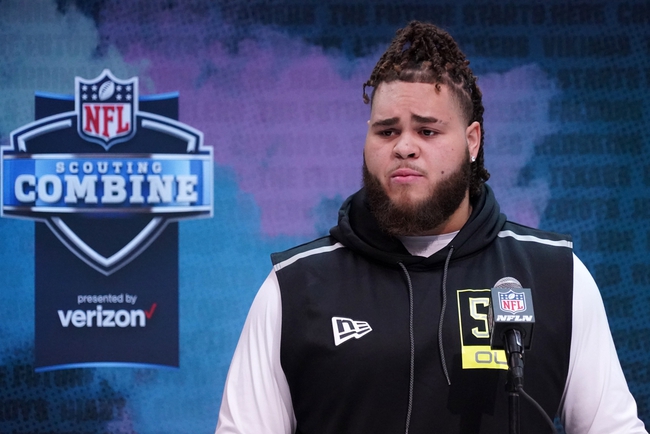 Who Will The New York Giants Draft First?

The New York Giants are sitting pretty with the fourth overall pick in the 2020 NFL draft and have a wide variety of players they can select. There’s odds available on who the Giants are going to draft and there’s money to be made on this prop bet. Let’s breakdown the favorites and try to make money on the Giants draft pick.

Jedrick Wills Jr., -160 - Jedrick Wills is a terrific athlete with great feet and jumps out of his stance quickly, and he’d be a starter from day one to help protect quarterback Daniel Jones. While offensive linemen aren’t sexy picks, drafting Wills gives the Giants a solid building block for the next decade.

Tristan Wirfs, +275 - The same thing can be said about Tristan Wirfs in terms of starting from day one on the offensive line and being a key piece to keeping Jones upright. Wirfs just isn’t as polished as Wills and can struggle against bigger, faster pass rushers.

Isaiah Simmons, +275 - Isaiah Simmons is one of the most versatile defensive players we’ve seen in draft history, and his athleticism, football IQ and ability to cover sideline to sideline makes him highly intriguing as a top-five pick. Simmons would also fix a lot of the Giants issues on the defensive side, immediately upgrading a side of the ball that was 30th in points allowed and 25th in yards allowed.

Andrew Thomas, +900 - Andrew Thomas was an unanimous All-American, something the other tackles in this draft can’t say. However, we’re not hearing much about Thomas being linked to the Giants and some believe his footwork still needs improvement. If the Giants trade back a bit, Thomas would certainly be an option.

Mekhi Becton, +1800 - Mekhi Becton shined at the NFL combine when he ran a 5.1 despite being 6’7”, 360 pounds. Becton drips with potential and could very well be one of the better players in this draft when its all said and done. However, Becton failed a drug test and we saw with Laremy Tunsil how red flags hurt draft stock. Becton won’t be a top-five selection.

Pick: Jedrick Wills. The Giants should strongly consider Simmons given his versatility and the issues on defense, however, when you have a young quarterback, the first priority is protecting him and surrounding him with help. Jedrick Wills is the overall best offensive lineman in this draft class given his footwork and his hand usage. Wills to the Giants has gained momentum over the last week and top five picks are usually concrete once you get closer to draft day. Wills and this reasonable price is a nice way to make some quick cash Thursday night.