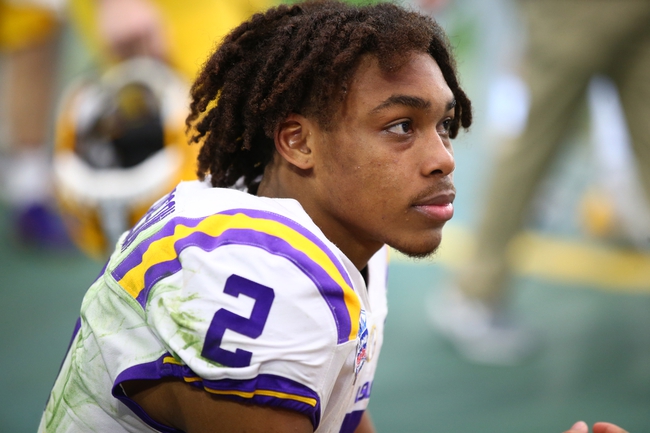 Who Will The Philadelphia Eagles Draft First?

The Philadelphia Eagles have the 21st overall pick in the 2020 NFL draft and you can bet on who they will select Thursday night. There’s some reports out there that the Eagles want to trade this pick, but if they use it, there’s a chance to make some money. Let’s breakdown the favorites for the Eagles selection and find some betting value.

Justin Jefferson, +150 - Justin Jefferson is the player the Eagles have been linked to the most in mock drafts and is probably the most realistic. Jefferson fits an area of need for the Eagles at wide receiver, and he has the size, hands and jumping ability to be a potential No. 1 target for Carson Wentz. Jefferson doesn’t have the upside as some of the other receivers in this class, but he’s polished and has a real chance to slip to this spot.

Denzel Mims, +450 - Denzel Mims would be the selection if there’s a real run on wide receivers in the first round, but he’s not a bad consolation prize at 6’2” and ability to gain yards after the catch. With hi size and ability to track the ball, Mims could be the best receiver the Eagles have had in quite some time, but some may think this would be a reach at the 21 spot.

CeeDee Lamb, +700 - You could argue CeeDee Lamb is the best receiver in this draft class given his toughness, sure hands and ability to pull away from defenders after the catch. Lamb is a receiver who has a long future in the NFL and the Eagles would be fools to pass him up if he drops for whatever reason. However, don’t hold your breath on that one.

Henry Ruggs III, +750 - Pretty much the same thing you say about Lamb is what can be said about Henry Ruggs. He’s arguably the best receiver in this class and has game changing speed that takes the top off a defense. The reason for Lamb and Ruggs’ odds being pretty high is because they should be long off the board by the time the Eagles are on the clock.

Pick: Justin Jefferson. Jefferson has been linked to the Eagles more than any other player and he’s a more realistic option at the 21 spot with Lamb and Ruggs likely long gone. Jefferson has the build to be a No. 1 receiver and the leaping ability to be a true red zone threat. This pick fills an area of need for the Eagles and gives Wentz an immediate weapon he didn’t have last season. This is a solid, solid selection for the Eagles and worth a bet given the plus money.