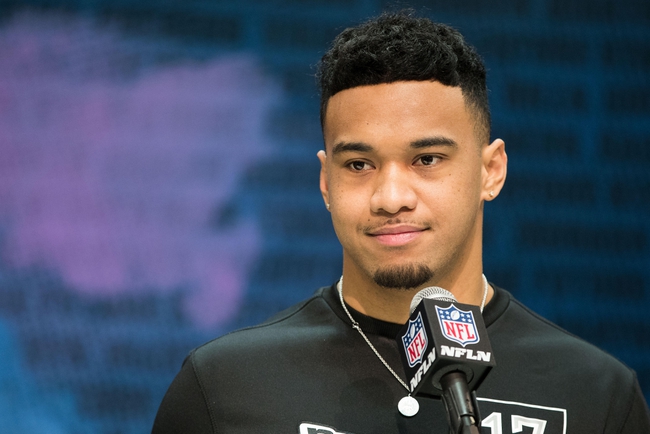 As we gear up for the 2020 NFL draft, one of the main topics of discussion is where Tua Tagovailoa is selected. Tagovailoa would probably be the first overall pick if it wasn’t for his injury concerns, and because of those issues, we’ve seen several teams linked to his services. There’s a prop bet available for where Tagovailoa ends up, and this article I’ll be breaking down the favorites and trying to cash a ticket on draft night. CLICK HERE

Miami Dolphins, +100 - Out of all the realistic teams to draft Tagovailoa, the Miami Dolphins have the best shot sitting with the fifth overall pick. The Dolphins haven’t had a franchise starting quarterback since Dan Marino and this is really their first honest shot to find their guy since he retired. The Dolphins also have a million draft picks over the next two years, so they can put together a package to move up if need be.

Jacksonville Jaguars, +500 - The Jacksonville Jaguars are another team that doesn’t have a franchise quarterback on their roster and need to make a move to reignite their fanbase. Selecting Tagovailoa would put the Jags back on the map in a way. The problem is the Jaguars have the ninth overall and 20th overall picks, and Tagovailoa will be off the board when both of those picks are on the click. The Jaguars would have to make some moves to get Tua.

Las Vegas Raiders, +700 - The Las Vegas Raiders have two first round picks they would need to flip to move up in a position to get Tagovailoa, but they need to be bold moving to the Sin City and not having a franchise game changer at quarterback. Derek Carr and Marcus Mariota have shown flashes, but neither are the answer for the future of this franchise.

New England Patriots, +1000 - The New England Patriots would need to put together a hell of a package to move from 23rd overall to within the top-five to get Tagovailoa, but desperate times call for desperate measures. The Pats no longer have Tom Brady and this franchise is vulnerable for the first time in two decades. It wouldn’t be the first time if the Patriots had a trick up their sleeve.

Pick: Miami Dolphins. There’s been a trillion different reports out there about the Dolphins and it tells me nobody knows what their goal is come draft night. It feels like the Dolphins are playing the media by setting up smoke screen after smoke screen, and the more they say Tagovailoa insn’t the guy, the easier it becomes to get him. The Dolphins have spent the last 20 years playing it safe and striking out. Tagovailoa is easily the best quarterback in this class when healthy and Miami would be fools to pass him up. Miami not only is the first team with a real shot to get Tagovailoa without moving up, but they also have more draft capital than any team to top any trade if needed. Bottom line is, if the Dolphins want Tagovailoa, there’s no team that can stop them from getting him. I expect this new Dolphins regime to be bold and get their starting quarterback for the first time in 20 years.