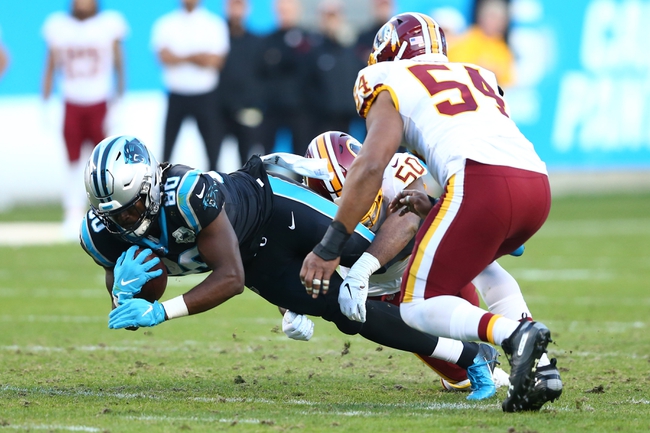 The Carolina Panthers and the Washington Redskins meet in a Madden 20 NFL simulation game on Wednesday afternoon.

The Carolina Panthers will look to rebound from their first simulation loss after a 43-38 defeat at the hands of Tampa Bay last time out. Carolina is arguably the luckiest team in this year’s Madden as the only team with two 99 overall rated players, and they have one on each side of the ball. Christian McCaffrey is the offensive stud for the Panthers with 92 speed, 93 acceleration and 97 agility as well as 98 carrying and 96 juke. Greg Olsen is at 88 overall at tight end with 93 catching and 93 catching in traffic while D.J. Moore comes in at 85 overall with 93 speed and acceleration and 81 catching at wide receiver. Cam Newton’s healthy in game, but his overall rating is still down to 79 yet he still remains the starting pivot for the Panthers. On defense, Luke Kuechly holds onto the other 99 rating at linebacker, with 90 jumping, 91 impact blocking and 99 tackling as well as 99 play recognition and 96 pursuit. After Kuechly, Gerald McCoy and Kawann Short anchor the defensive line at 85 and 84 overall, with both possessing strength and impact blocking ratings in the low-90s.

The Washington Redskins will try to build on a 31-15 win over Cincinnati in their last outing. Washington’s strength sits on their offensive line, with Trent Williams coming in with a 92 overall rating including 95 strength, 92 pass block and 93 run block while Brandon Scherff is 88 overall with 90 run blocking and 92 strength. Jordan Reed comes in as the Redskins’ top receiver at 84 overall with 87 catching and 87 catching in traffic while Terry McLaurin is at 81 overall and Derrius Guice leads the backfield at 80 overall, sharing the ball carrier work with Adrian Peterson who is at 79 overall. Dwayne Haskins Jr. is the Redskins’ starting QB despite just a 70 overall rating. Defensively, Matt Ioannidis leads the Washington’s D with an 85 overall rating with 86 acceleration and 86 strength to go along with 84 tackling and 89 power moves while Ryan Kerrigan is at 84 overall at outside linebacker with 88 power move, 88 impact blocking and 86 acceleration.

Heavy lines in these sim games aren’t something I’m trying to mess with, and Wednesday’s card from top to bottom is difficult. However, a win for Washington doesn’t do much for me in a simulation against a bad team like the Bengals, and while Carolina stumbled against Tampa Bay, the Panthers have been playing the better sim games and just have the better team, ratings included. I’ll lay the points with Carolina here.