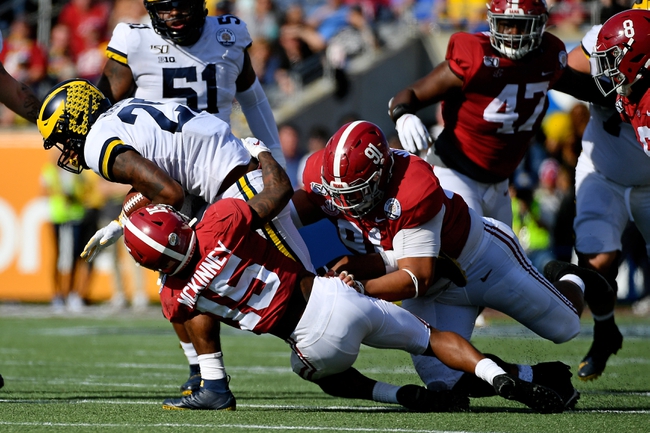 Who Will Be The First Safety Drafted In The 2020 NFL Draft?

Xavier McKinney, Alabama, -450, McKinney has a solid 2019 season, including 95 tackles with 3 interceptions, 3 sacks and 4 forced fumbles. McKinney was basically Mr. Do-It-All for Alabama in the Tide’s secondary, as McKinney could easily deal with man coverage, drop back into zone at free safety and tackle in the open field or put pressure on opposing QBs. That talent should be able to transfer over to the professional stage. The knock on McKinney is that he had a slow 40-yard dash time at the combine and that he’s undersized for the physical style he plays. Either way, McKinney is widely viewed at the top safety in the draft and will be a player to watch when his time comes.

Grant Delpit, LSU, +350, Delpit had 59 tackles with a pair of interceptions in 2019 and was also a Swiss Army knife with the amount of different ways he could and was used in the LSU defense. Delpit may be better served gaining a bit of muscle and playing strong safety wherever he is grabbed, but Delpit will also have to improve on the missed tackles and blown assignments that occurred in pass coverage this season if he’s to succeed in that role.

Antoine Winfield Jr., Minnesota, +650, Winfield was a heck of a defender for P.J. Fleck’s Golden Gophers last season, logging 7 interceptions with 85 tackles and 3 sacks as well. Winfield is a solid option at safety with his instincts and can play the ball well in the air. Winfield also has tremendous discipline against opposing receivers and has the footwork to keep pace in coverage. Winfield has the speed to latch onto speed receivers down the field but can also range from midfield to the sideline in a heartbeat. Winfield can also put a licking on ball carriers on the ground, but the concern is that he’s too small to do that on a consistent basis, standing a mere 5’9”.

Pick: From a value perspective I could definitely make a case for Winfield Jr. at +650, as he plays well above his size and is one of the best tacklers I’ve seen at safety in some time. However, while we’re always looking for value, this is about projecting who is going to be the first safety off of the board, and I think it will be Xavier McKinney. McKinney just looks to be the complete package at safety, and he can pretty much do anything asked of him. We all know how much versatility is valued and at safety in the NFL it’s no different.