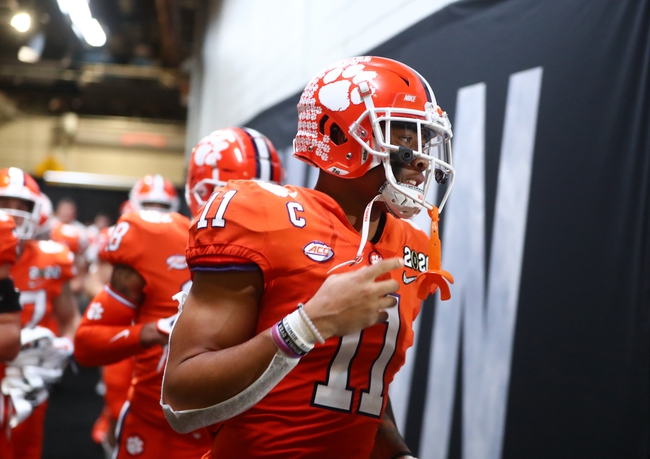 Former Clemson linebacker Isaiah Simmons will likely be the first player at his position to come off the board in the 2020 NFL Draft. Simmons already has NFL-level talent and the scouts love him, so he’ll get plenty of interest from several different teams. Which one will call his name on draft night?

Let’s break down Simmons’ possible landing spots and examine them against the prop bets.

Carolina Panthers (+200) - Odds-wise, Carolina has the best shot at landing Simmons. It makes sense; the Panthers will be looking defense here as they were gutted by free agency and retirements in the offseason.

But which spot will Carolina go with that No. 7 overall selection? If Simmons is there, I’d say there’s a 50/50 shot the Panthers take him; another distinct possibility is Derrick Brown (Auburn DL) who should be there as well.

New York Giants (+300) - Here's another likely spot for Simmons to land. New York has the No. 4 selection overall, and if things break like most mock drafts believe they will, the Giants have a great opportunity to grab some defensive help here.

The only thing throwing a possible wrench into this Simmons scenario is if New York goes OL at No. 4, taking a guy like Jedrick Wills Jr. off the board instead.

Arizona Cardinals (+650) - The Cardinals are sitting at No. 8 overall, and if teams go by the “best player available” strategy outside of QBs, then Simmons won’t even be available here. Beyond that, it seems Arizona will be looking more at offensive tackle with this selection. If Simmons is still on the board at No. 8 it’s a possibility but I don’t see it playing out that way.

Detroit Lions (+950) - In all likelihood, Detroit will be going defense with this pick, so Simmons will certainly be in play at No. 3 overall. That said, most mock drafts are pretty well set with how the first two picks are going (Joe Burrow to the Bengals and Chase Young to the Redskins). After that, most people expect the Lions to take cornerback Jeff Okudah. CB is more of a glaring need for Detroit right now so I’d be inclined to agree there.

Los Angeles Chargers (+1100) - This one looks crazy, but there’s a lot of validity here. Provided Simmons drops to the Chargers at No. 6 overall—and they don’t go with an OT—Simmons could very well be the guy. That Los Angeles defense would get an immediate upgrade and the team would be one step closer to competing with Kansas City.

Atlanta Falcons (+1200) - Now we’re getting into the more improbable scenarios, and with Atlanta sitting all the way down at No. 16 overall, it’s difficult to imagine Simmons lasting that long. So, the Falcons would have to trade up to get him.

Would Atlanta pull the trigger on a first-round trade-up? I don’t think so; not far enough to get Simmons anyway. The Falcons are consciously looking for defensive players early, but I would imagine they’ll stay put here and go DL or CB with this first-round pick.

Pick: This is a tough one with lots of variables, but I’m going with the Giants at No. 4 overall here. New York needs some playmakers on defense to pair with the handful of potential dazzlers they have on the other side of the ball, and adding Simmons to that mix would be a big step in the right direction. If all works out, with Simmons on board the Giants could be competitive in that wide-open NFC East this year.

All of that said, you wouldn't be crazy taking the Chargers on a potentially high-payout value pick here.