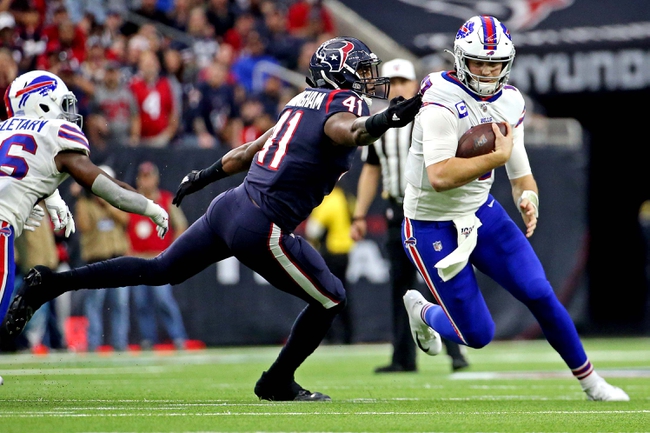 The Buffalo Bills and the San Francisco 49ers meet in a Madden 20 NFL simulation game on Thursday afternoon.

The Buffalo Bills will try to build some steam after a 41-31 win over Houston last time out. Cole Beasley and John Brown lead Buffalo on offense at the two wide receiver spots, coming in with an 83 overall rating, with Brown being the faster of the two in-game with 92 speed and 90 acceleration while Beasley is the shiftier receiver with 92 agility. Frank Gore and Devin Singletary are the tandem at running back for the Bills at 80 overall, while Josh Allen is at 77 overall as the Bills’ starting quarterback. On the defensive side of the ball, the secondary is Buffalo’s strongest asset with Micah Hyde and Tre’Davious White both at 88 overall, with White possessing 91 speed and 93 acceleration at cornerback while Hyde has a 91 zone coverage rating at free safety. Jordan Poyer is 85 overall at strong safety and Lorenzo Alexander is a decent 83 overall at one of the outside linebacker spots.

The San Francisco 49ers will try to rebound from a 30-27 loss to Green Bay last time out. George Kittle leads the Niners on offense as a 97 overall at tight end with 98 catching while Emmanuel Sanders comes in as the top wide receiver for San Fran at 89 overall with 94 catching, 92 acceleration and 93 agility. Jimmy Garoppolo is the 49ers’ starting quarterback at 84 overall while Tevin Coleman is right behind at running back at 82 overall with 93 speed, 92 acceleration and 93 agility. On defense, Richard Sherman leads San Fran at 94 overall at corner, with 99 awareness as well as 98 jumping, 90 man coverage and 99 zone coverage. Nick Bosa leads the 49ers’ pass rush at 89 overall with 91 finesse move and 91 acceleration. The 49ers’ D also has four additional defenders with at least an 85 overall rating, including Arik Armstead, DeForest Buckner, Dee Ford and Fred Warner.

I’d like to make a case for Buffalo and the points here as the win over Houston was solid and anything can happen in these sim games. However, confidence doesn’t play into the game as it’s a CPU vs. CPU matchup, and the fact is that the 49ers have been the better team, the better-rated team, and have been doing really well in these sim matchups. I’ll lay the points with San Francisco in what should be a double-digit 49ers win. CLICK