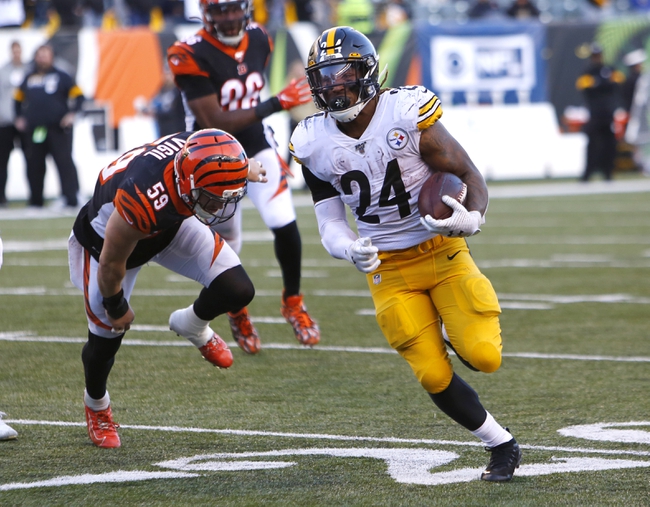 The Pittsburgh Steelers and the Cincinnati Bengals meet in an AFC North division matchup in a  Madden 20 NFL simulation game on Friday afternoon.

The Pittsburgh Steelers will try to bounce back from a 41-13 loss to Denver in their last outing. JuJu Smith-Schuster leads the Steelers’ offense in the receiving group with an 86 overall rating, which includes a grade of 91 speed and 92 acceleration as well as 90 catching and 93 catching in traffic while James Conner is starting at running back with an 81 overall rating with 86 speed, 89 acceleration and 89 carrying. Ben Roethlisberger is under center with an 81 overall rating with 89 throwing power and 89 short passing accuracy. On defense, Cameron Heyward leads the Steelers at 90 overall with 93 strength, 91 tackling and 92 power move while Stephon Tuitt is on the other side of the front at 87 overall with 90 block shedding and 91 strength.

The Cincinnati Bengals will still be looking for their first sim win, sitting at 0-5 in sim play after a 31-15 loss to Washington last time out. A.J. Green leads Cincinnati with a 90 overall rating at wide receiver, with 90 speed and 92 agility with 92 catching and 96 marks in catching in traffic and spectacular catch. Joe Mixon starts at running back for the Bengals with an 87 overall rating with 91 speed and 93 acceleration while Tyler Boyd is 83 overall at wide receiver and Andy Dalton is starting at QB for the Bengals, but only has a 72 overall rating at the position. On defense, Geno Atkins leads the Bengals’ defensive line at 88 overall with 90 strength, 89 impact blocking and 90 power move. Carlos Dunlap is also at 82 overall on the defensive line while William Jackson leads the secondary at 81 overall.

It looks like art imitating life as the Bengals are as bad in these sim games as they were in reality this season, and getting doubled up by Washington doesn’t help the stance on that matter. Pittsburgh had a lot of issues against Denver, but they’ve been the much better team offensively and already beat the Bengals 38-10 just last week. Even in a simulation, I want nothing to do with the Bengals. Give me Pittsburgh and lay the points.