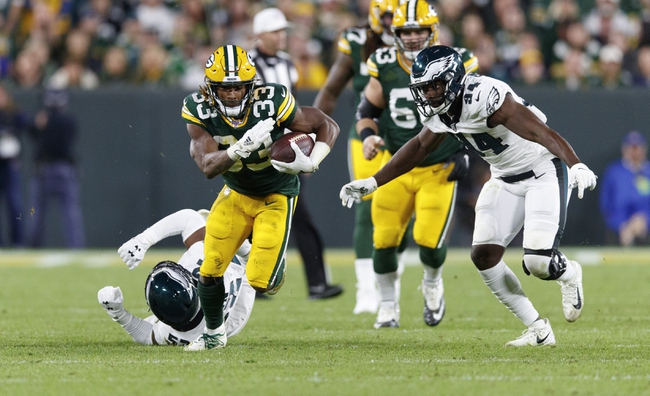 The Green Bay Packers and the Cleveland Browns meet in a Madden 20 NFL simulation game on Friday night.

The Green Bay Packers come into this one with their five-game sim winning streak in tact after their game against New England was voided due to a roster issue. Davante Adams leads the Packer offense at 94 overall, with 94 catching and 94 catching in traffic while also possessing 89 speed and 92 acceleration. Aaron Rodgers remains at starting QB with an 89 overall rating, with 94 throwing power, 90 short pass accuracy and ratings in the high-80s in medium and deep pass accuracy. Aaron Jones leads the Green Bay ground attack with an 87 overall attribute rating with 93 carrying, 92 juke, 91 speed and 93 acceleration. On defense, Kenny Clark leads the Green Bay defense on the pass rush at 90 overall with 95 strength with 92 block shedding and 89 power moves while Jaire Alexander is close behind at 89 overall to lead the Packers’ secondary at corner, with 92 man coverage in addition to 93 ratings in speed and acceleration with 94 agility. Za’Darius Smith and Adrian Amos come in at 88 and 87 overall respectively as well as a pair of key pieces in a stacked Green Bay defense.

The Cleveland Browns will look to rebound from a 43-17 loss to the Baltimore Ravens in their last outing. Nick Chubb leads Cleveland’s offense with a 92 overall attribute rating, with 92 speed, 91 acceleration and 85 strength grades. Odell Beckham Jr. is the top receiver for the Browns, rated 90 overall with a 99 rated spectacular catch as well as 91 in catching in traffic and a 98 mark in ball carrier vision while also having 94 attribute ratings in speed and acceleration and 98 agility. Kareem Hunt comes in at 88 overall at running back, with 90 speed and 92 acceleration and 92 agility along with a 98 carrying rating. Baker Mayfield comes in at 76 overall under center including 93 throwing power, 87 short pass accuracy and 85 long ball accuracy. On defense, Myles Garrett is the top guy with a team-high 93 overall rating at defensive end, with 85 speed, 90 acceleration and 96 strength as well as a 95 power move rating.

I liked what I saw from Cleveland early on, but the Browns are starting to tail off quite a bit and when they’re losing, they’re losing big. Green Bay is still a solid team in their own right and while a lot of these sim games are coin flips, I just like what I’ve seen from Green Bay and there’s enough of a sample size to justify it. I’ll lay the points with Green Bay here.