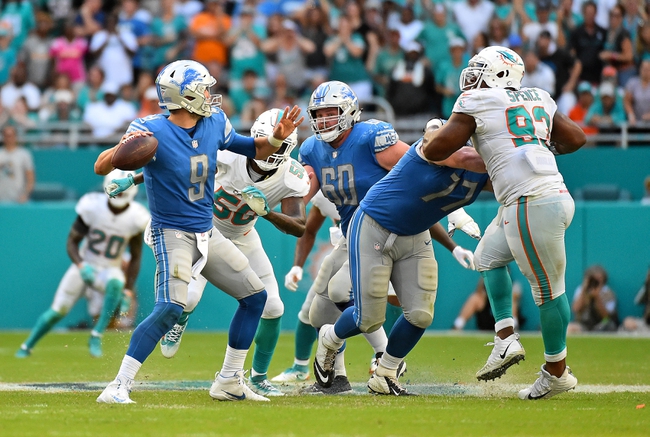 The Detroit Lions and the Miami Dolphins meet in a Madden 20 NFL simulation game on Friday afternoon.

The Detroit Lions will look to build on a 44-14 win over the New York Giants in their last game. Kenny Golladay and Marvin Jones Jr. remain the top receiver duo for the Lions with Golladay at 86 overall and Jones Jr. at 85 overall with both logging a 90 speed rating and a low-90s acceleration rating. Matthew Stafford is still the starting QB for Detroit with an 82 overall rating, including a 94 rated attribute in throwing power. On defense, Damon Harrison Sr. leads the Lions with an 89 overall rating, including a 95 grade in impact blocking and 92 in tackling as well as a 91 mark in block shedding. Darius Slay Jr. may not be with the Lions, but he still is on the team here and has high-80s ratings in man and zone coverage as well as low-90s ratings in speed, acceleration and agility.

The Miami Dolphins will look to rebound from a 48-10 loss to the Baltimore Ravens in their last outing. Devante Parker leads Miami with an 84 overall rating, including 91 speed and 91 acceleration while Albert Wilson is at 76 overall at wide receiver as well with 91 speed and acceleration as well. Ryan Fitzpatrick is at starting quarterback for Miami, but only at a 74 overall rating. On defense, three of Miami’s four 80+ rated overall players are all in the secondary, with Xavien Howard and Aqib Talib at 82 and 81 overall with Howard possessing 92 speed and 92 acceleration while Talib has 91 acceleration and 91 agility. Reshad Jones is also at 82 overall at strong safety with 86 speed and 89 acceleration.

I’m not really sure what to make of either team here, but I will say that the Dolphins have looked like the slightly better team in these sim games despite getting blown out by Baltimore last time out. The Dolphins have hung around with the lesser teams they’ve played and beat Buffalo twice already. A win over the brutal Giants doesn’t inspire me much in terms of confidence here, We’re getting a free field goal with the hook in a game that I think is a coin flip. Give me Miami and the points here.