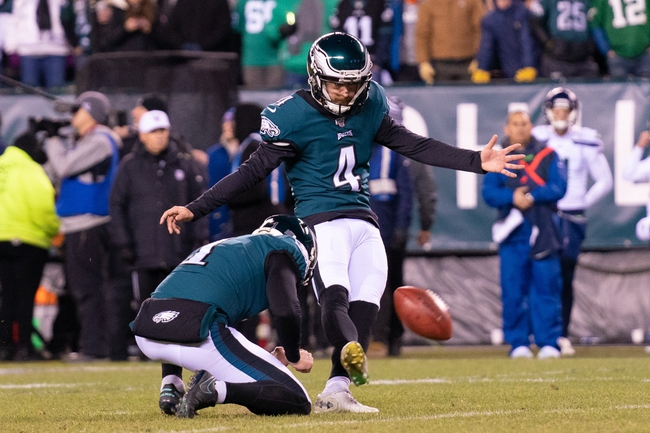 The Philadelphia Eagles and the Buffalo Bills meet in a Madden 20 NFL simulation game on Saturday afternoon.

The Philadelphia Eagles will look to build off of a 27-24 win over New Orleans last time out. Zach Ertz leads the Eagles’ offense rated 90 overall with 87 acceleration and 93 catching while Alshon Jeffery and DeSean Jackson make up the Eagles’ top wide receiver duo at 85 and 84 overall respectively. Carson Wentz is starting at quarterback for Philadelphia at 83 overall while the Eagles top guys are on the right side of their offensive line with Jason Kelce at center with a 94 overall rating, Brandon Brooks at 93 overall at right guard and right tackle Lane Johnson at 89 overall. On the defensive end, Fletcher Cox leads Philadelphia at 95 overall with 95 strength, 93 tackling and 96 power move while Brandon Graham is right defensive end at 87 overall with 90 power move and 93 impact blocking. Malcolm Jenkins leads the Eagles’ secondary at 86 overall with 91 acceleration, 90 agility and 88 zone coverage.

The Buffalo Bills will look to rebound from back-to-back losses after a 27-26 loss to San Francisco last time out. George Kittle leads the 49ers on the offensive as a 97 overall at tight end with 98 catching while Emmanuel Sanders comes in as the top wide receiver for San Francisco at 89 overall with 94 catching, 92 acceleration and 93 agility. Jimmy Garoppolo is the 49ers’ starting QB at 84 overall while Tevin Coleman is right there at running back at 82 overall with 93 speed, 92 acceleration and 93 agility. On D, Richard Sherman leads San Fran at 94 overall at cornerback, with 99 awareness as well as 98 jumping, 90 man coverage and 99 zone coverage. Nick Bosa leads the 49ers’ pass rush at 89 overall with 91 finesse move and 91 acceleration. The 49ers’ D also has four additional defenders with at least an 85 overall rating, including Arik Armstead, DeForest Buckner, Dee Ford and Fred Warner.

I’ll give the Bills credit in that sim game against San Francisco, as Buffalo looked like a solid team even in the simulation. However, we have a big enough sample size that tells us that the Bills are not good at all in these sim games. On the other hand, Philadelphia’s had their ups and downs, but the Eagles are the better team and are coming off of that solid win over the Saints. I’ll lay the points with the more trustworthy team here, and that’s the Philadelphia Eagles.