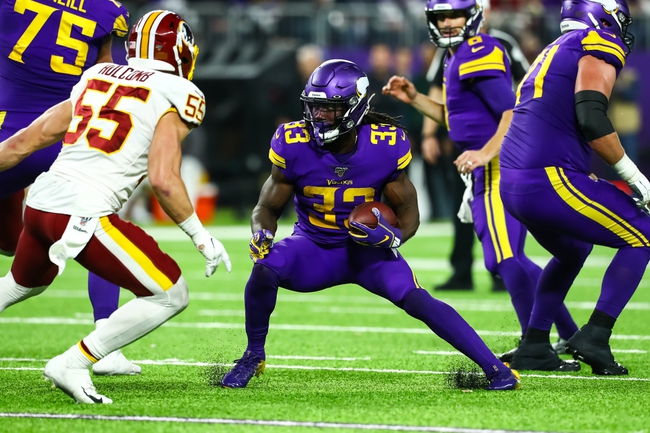 The Minnesota Vikings and the Washington Redskins meet in a Madden 20 NFL simulation game on Saturday morning.

The Minnesota Vikings will look to add to their current three-game sim winning streak after a 27-23 win over the Chicago Bears. Stefon Diggs isn’t a Viking anymore, but he’s still on Minnesota in this game with a 93 overall rating with 92 catching, 91 speed, 93 acceleration and 93 agility. Adam Thielen has a 91 overall rating at the other wide receiver slot with 90 speed and 93 grades in acceleration and agility as well. Thielen also has 95 catching and 90 catching in traffic. Dalvin Cook leads the Viking backfield at 90 overall with 91 speed, 92 acceleration and 94 agility while Kyle Rudolph is an 84 overall rated tight end and Kirk Cousins is 84 overall at starting QB. On defense, Harrison Smith leads Minnesota at 95 overall with 93 power, 92 zone coverage, 95 play recognition and 93 pursuit. The Vikings have a group of 90 overall rated defenders, with Everson Griffen and Danielle Hunter bookending the D-line while Eric Kendricks hunkers down the linebacking corps. Linval Joseph also sits at 86 overall in the middle of the defensive line.

The Washington Redskins will look to build on a 34-28 overtime win over the Carolina Panthers last time up. Washington’s greatest asset is their offensive line, with Trent Williams leading with a 92 overall rating including 95 strength, 92 pass block and 93 run block while Brandon Scherff is 88 overall with 90 run blocking and 92 strength. Jordan Reed comes in as the Redskins’ top receiving threat at 84 overall with 87 catching and 87 catching in traffic while Terry McLaurin is at 81 overall and Derrius Guice leads the backfield at 80 overall, sharing the ball carrier work with Adrian Peterson who is at 79 overall. Dwayne Haskins Jr. is the Redskins’ starting QB despite being rated at just 70 overall. Defensively, Matt Ioannidis leads the Washington’s D with an 85 overall rating with 86 acceleration and 86 strength to go along with 84 tackling and 89 power moves while Ryan Kerrigan is at 84 overall at outside linebacker with 88 power move, 88 impact blocking and 86 acceleration.

I’m strongly looking at the Redskins and the points given how the Redskins looked against Carolina and the Vikings three-game winning streak is made up of three wins by four points or less and by a combined 10 points. Just goes to show you that these sim game really are a coin flip and this one’s no different. However, the Vikings are still the much better team here and I think Minnesota is fully capable of winning this one by a touchdown if the ratings and the gameplay goes true to form. I’ll lay the points with Minnesota here.