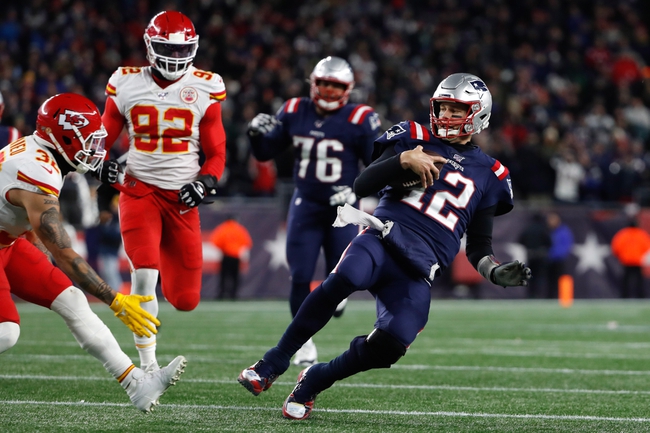 The Kansas City Chiefs and the New England Patriots meet in a Madden 20 NFL simulation game on Sunday night.

The Kansas City Chiefs will look to push ahead after a 27-20 win over Dallas in their last game. Patrick Mahomes comes into this one as one of the game’s five 99 overall rated players, with 96 throwing power as well as 97 short pass accuracy, 95 medium pass accuracy and 93 deep pass accuracy. Tyreek Hill is close behind at 96 overall, with a 91 attribute rating in catching along with 97 juke, 99 speed, 99 acceleration and 98 agility. Travis Kelce is also at 96 overall as KC’s top tight end with attributes of 99 awareness, 85 speed. 91 catching in traffic and 91 catching overall. On defense, Chris Jones and Tyrann Mathieu share the team-high on the Chiefs defense with Jones leading the pass rush at 92 overall with 91 strength, 90 tackling, 89 finesse move and 95 power move while Mathieu anchors KC’s secondary at 92 overall with a 90 man coverage rating as well as 89 in zone coverage while also being rated at 90 speed, and 92 in acceleration and 92 agility.

I got burned by the over in the Dallas/KC game yesterday, but I’m going to go back to the well one more time and try the over again. Both sides have had issues keeping points off of the board, which is odd considering both have some top-rated talent on the defensive side of the ball. Kansas City (aside from yesterday’s game against Dallas) had been giving up 30 points or more consistently in these sims and New England’s solid defense in reality just didn’t transfer over to the game simulations. I think we see a shootout here, so I’ll take the over.