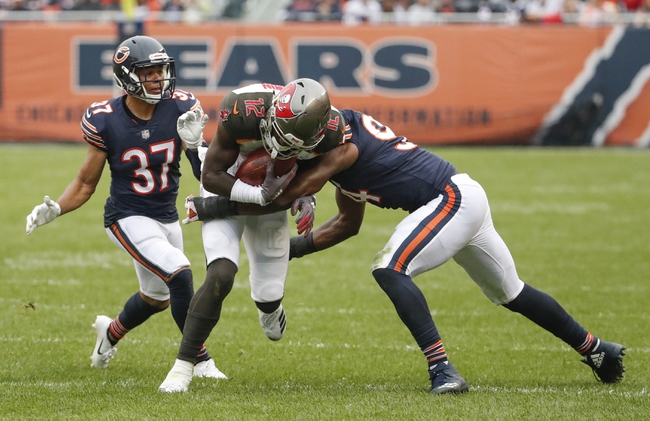 The Chicago Bears and the Tampa Bay Buccaneers meet in a Madden 20 NFL simulation game on Sunday afternoon.

The Chicago Bears will try to rebound from a 27-23 loss to Minnesota last time out. Allen Robinson II leads the Bears on offense with an 89 overall rating with 90 speed and 93 acceleration as well as 96 catching while Trey Burton comes in at 82 overall at tight end and Taylor Gabriel is on the other side at wide receiver with an 81 overall rating. Tarik Cohen leads the Bears’ backfield at 78 overall while Mitch Trubisky is still Chicago’s starting QB at 73 overall. On defense, Khalil Mack leads Chicago with a stacked 98 overall rating, with 87 speed and 89 acceleration along with 94 tackling, 90 impact blocking, 91 block shedding, 91 finesse move and 95 power move. Eddie Jackson is at 89 overall at free safety with a 94 grade in zone coverage and 90 acceleration while Kyle Fuller has 92 speed and acceleration at cornerback with 91 zone coverage and Akiem Hicks is at 88 overall at left defensive end with 91 block shedding and 89 power move.

The Tampa Bay Buccaneers will try to rebound from a 33-28 loss to Cleveland last time out. Mike Evans and Chris Godwin lead the Bucs’ offense and the receiving corps as well with Evans owning a team-high 92 overall rating with 90 catching, 95 catching in traffic and 97 spectacular catch while Godwin is 87 overall with 97 catching. Jameis Winston comes in at 78 overall under center for Tampa Bay in this year’s edition of the game. On the defense, Lavonte David is Tampa Bay’s leading linebacker with a 90 overall rating, with 92 pursuit, 87 block shedding, 88 impact blocking and 89 tackling. Ndamukong Suh is up front at 86 overall with 93 impact blocking and Vita Vea is right behind alongside at 85 overall with 91 impact blocking.

I backed Tampa Bay yesterday and it blew up in my face as the Bucs fell to Cleveland. However, I feel the same about the Bears here as I did against the Vikings, meaning I’m not sure why the Bears are favored here. The Bears have an edge at running back with Tarik Cohen, but Tampa Bay’s got two of this game’s top receivers and as much as I bash Jameis Winston, he’s a better option in this game than Mitch Trubisky. Before the Cleveland loss, Tampa was playing pretty well in these simulations too. I’ll take a shot with Tampa Bay and the points as well as putting a bit on the Bucs on the moneyline.