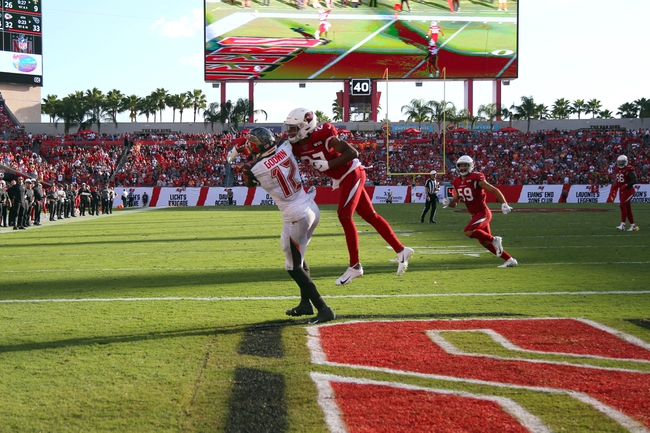 The Tampa Bay Buccaneers and the Arizona Cardinals meet in a Madden 20 NFL simulation game on Monday afternoon.

The Tampa Bay Buccaneers will look to bounce back after a 2nd straight sim loss after a 39-17 loss to Chicago last time out. Mike Evans and Chris Godwin lead Tampa Bay’s offense and the receiving group as well with Evans owning a team-leading 92 overall rating with 90 catching, 95 catching in traffic and 97 spectacular catch while Godwin is 87 overall with 97 catching. Jameis Winston comes in at 78 overall at QB for Tampa Bay in this year’s edition of the game. On the defensive side of the ball, Lavonte David is Tampa Bay’s leading linebacker with a 90 overall rating, with 92 pursuit, 87 block shedding, 88 impact blocking and 89 tackling. Ndamukong Suh is up front at 86 overall with 93 impact blocking and Vita Vea is right behind alongside at 85 overall with 91 impact blocking.

The Arizona Cardinals will look to rebound from a 29-22 loss to the Raiders last time out. Larry Fitzgerald leads the Cardinals’ offense at 83 overall at wide receiver with a 93 catch rating and 91 catching in traffic while Kenyan Drake sits at 81 overall in Arizona’s backfield with 91 speed, 89 acceleration, 90 agility and 87 carrying grades. Kyler Murray comes in as the Cardinals’ starting QB at 75 overall with 91 speed, 92 acceleration and 90 agility as well as 89 throwing power. On D, Chandler Jones leads the Cardinal defense with a 90 overall rating, including 92 power move and an 86 tackle rating while Patrick Peterson is at 92 overall with 92 speed, 92 acceleration, 95 agility and 89 man coverage at cornerback.

I’m not trying to get behind either of these two teams right now, as both have found ways lose games lately. However, momentum isn’t a factor in these sim games as it’s a one off exhibition and only one simulation is picked to be bet on, so anything can happen. With that said, the Bucs have the better rated players at many different positions and I think that’s the difference here as the Bucs win this one by at least a touchdown.

The pick in this article is the opinion of the writer, not a Sports Chat Place site consensus.
Previous Pick
New England Patriots vs. Kansas City Chiefs - 4/26/20 Madden 20 Sim NFL Pick, Odds, and Prediction
Next Pick
Mr. Irrelevant 2020 NFL Draft