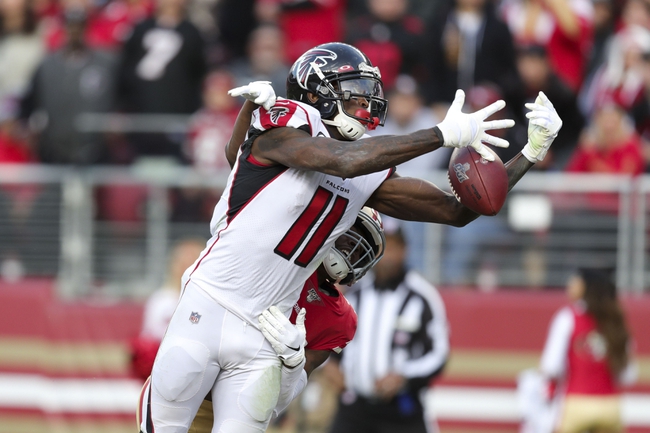 The New England Patriots and the Atlanta Falcons meet in a Madden 20 NFL simulation game on Monday night.

The New England Patriots will try to bounce back after being demolished in a 47-16 loss to Kansas City last time out. Tom Brady leads the Patriots offense at QB with a 91 overall rating with 90 throw power and 96 short pass accuracy while Julian Edelman is the leading pass-catcher in the New England offense at 87 overall with 91 acceleration, 91 agility and 85 catching. James White leads the Pats’ running back group at 83 overall with 89 speed, 92 acceleration and 90 agility. On the defensive, Stephon Gilmore leads the Patriots with a 98 overall rating with 99 awareness and 92 speed with 94 acceleration and 94 agility while also rated at 98 in man coverage and 96 in zone coverage. Devin McCourty is New England’s second-highest rated DB at 92 overall with 93 zone coverage and 90 marks across the board in speed, agility and acceleration. Dont’a Hightower leads New England’s linebacking corps at 88 overall with 91 impact blocking and 92 tackling as well as 93 play recognition and 93 pursuit.

The Atlanta Falcons will try to build on a 3rd straight simulation win after a 31-17 win over Denver in their last game. Julio Jones leads the Falcons with a 97 overall rating, with 92 speed and 94 agility to go along with 96 catching, 95 catching in traffic and 98 spectacular catch. Austin Hooper carries an 89 overall rating at tight end with 97 catching while Matt Ryan comes in at 87 overall at QB and Devonta Freeman leads the Falcons’ ground attack with an 85 overall rating with 92 speed and 94 agility. On defense, Grady Jarrett leads Atlanta rated 90 overall with 89 strength, 90 block shedding and 93 power move while Deion Jones is the Falcons’ top linebacker at 86 overall with 89 pursuit, 90 speed and 91 acceleration. Keanu Neal and Desmond Trufant lead the secondary at 85 and 84 overall respectively with Trufant logging 92 speed, 93 acceleration and 96 agility.

I’m a bit weary of backing the Falcons as I still have flashes of 28-3 in my head from the real super bowl meeting a few years ago, and that’s coming from me as a New England fan. With that said, the defense that played so well in reality, just hasn’t shown up in these sim games as we saw by the Pats getting absolutely demolished by Kansas City. Atlanta’s had their own issues, but I think the Falcons can more than hold their own here so I’ll take a shot with Atlanta and the points as well as a little bit on Atlanta moneyline as well.