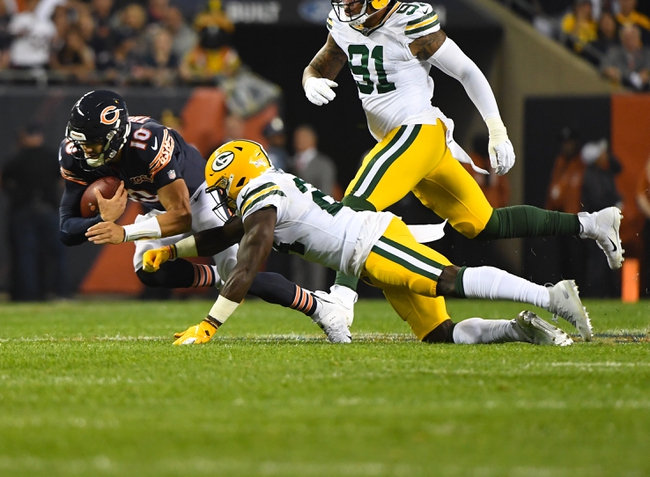 The Green Bay Packers and the Baltimore Ravens meet in a Madden 20 NFL simulation game on Monday night.

The Green Bay Packers will look to rebound from a 29-24 loss to Indianapolis last time out. Davante Adams leads Green Bay on the offensive end at 94 overall, with 94 catching and 94 catching in traffic while also possessing 89 speed and 92 acceleration. Aaron Rodgers remains starting QB with an 89 overall rating, with 94 throwing power, 90 short pass accuracy and ratings in the high-80s in medium and deep pass accuracy. Aaron Jones leads the Green Bay ground attack with an 87 overall attribute rating with 93 carrying, 92 juke, 91 speed and 93 acceleration. On defense, Kenny Clark leads the Green Bay defense on the pass rush at 90 overall with 95 strength with 92 block shedding and 89 power moves while Jaire Alexander is not far off at 89 overall to lead the Green Bay secondary at cornerback, with 92 man coverage in addition to 93 ratings in speed and acceleration with 94 agility. Za’Darius Smith and Adrian Amos come in at 88 and 87 overall respectively as well as a pair of key pieces in a loaded Green Bay defense.

The Baltimore Ravens will look to build on a 48-10 beatdown win over Miami in their last game. Lamar Jackson is Baltimore’s offensive leader at starting QB with a 92 overall rating, with 92 throw power and 92 short pass accuracy to go along with 96 speed, 96 acceleration and 95 agility. Mark Ingram II comes in at 86 overall as Baltimore’s top RB with 88 speed, 91 acceleration and 89 carrying while Mark Andrews is nearby at tight end with an 85 overall rating. On the defense, Earl Thomas III leads Baltimore with a team-high 93 overall rating, including 92 jumping and 96 zone coverage at free safety and Michael Pierce is a solid 91 overall on the defensive line with 94 block shedding and 90 impact blocking while Marlon Humphrey and Marcus Peters put together a strong cornerback duo at 89 and 85 overall for Baltimore. Humphrey owns a 90 man coverage rating as well as 92 speed and 93 acceleration while Peters has 87 man coverage, 91 speed and 91 acceleration.

The Ravens are a hard team to figure out in these sim games, as the talent is tehre, especially on the defensive end as well as Lamar Jackson, but the Ravens have folded in sims against the “good teams” and have beat up on the bad teams. Green Bay on the other hand, lost to Indianapolis, but they’ve been playing some solid sim games as of late. I just think that one off game isn’t a whole lot to sway me away from Green Bay, so I’ll take a shot with Green Bay and the points as well as a little bit on Green Bay moneyline.