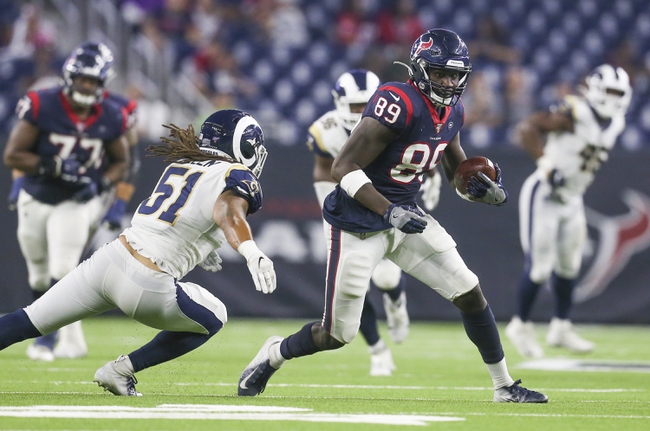 The Los Angeles Rams and the Houston Texans meet in a Madden 20 NFL simulation game on Monday afternoon.

The Los Angeles Rams will look to rebound from a 27-13 loss to the San Francisco 49ers in their last game. Cooper Kupp leads the Rams’ offense and receiving corps with an 87 overall rating with 94 agility and 95 catching while Robert Woods is close behind with an 86 overall mark including 94 catching and Brandin Cooks follows at 85 overall with 95 speed, 92 acceleration and 95 agility. Todd Gurley II leads Los Angeles’ rushing attack at 86 overall with 91 speed and 91 acceleration as well as 95 agility and 89 carrying. On defense, Aaron Donald is one of the s five highly-regarded 99 overall rated players with 90 acceleration, 99 power move, 96 finesse move, 97 block shedding, 93 impact blocking and 92 tackling. Jalen Ramsey leads the Rams’ secondary at 94 overall with 95 man coverage and 95 zone coverage with 92 speed, 93 acceleration and 90 agility.

The Houston Texans will look to bounce back from consecutive sim losses after a 27-23 loss to Indianapolis last time out. DeAndre Hopkins leads Houston at 98 overall in this edition of Madden with 98 catching as well as 99 marks in catching in traffic, spectacular catch, release and jumping with 92 speed, 93 acceleration and 92 agility. Deshaun Watson is rated at 86 overall at starting QB with 88 acceleration, 84 speed and 89 throw power while Lamar Miller is close by at 84 overall at starting running back with 91 carrying, 89 juke, 92 speed, 91 agility and 91 acceleration. Defensively, J.J. Watt leads at 97 overall with 97 strength, 94 impact blocking, 97 tackling, 93 finesse move and 94 power move. D.J. Reader and Justin Reid also come in at 84 overall for the Texans’ defense with Reader on the defensive front and Reid in the secondary.

This should be a great game between two teams that are fast on offense and skilled on defense. With that said, the Rams have disappointed more often than not in these sim games and while the Texans have a couple of disappointing losses of their own, anything can happen in these sims and the losses were a reflection of that. I just like the Texans a bit more than I do the Rams, so I’ll side with Houston in this pick ‘em.